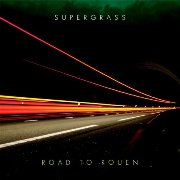 Supergrass began their career as an utterly refreshing blast of weed-choked breath in the face through the dreary post-grunge years with such bubbling pop bong-hits as "Caught By The Fuzz" and "Pumping On Your Stereo." Although they spawned many imposters early on, the last few years seemed a bit aimless.

Three years on, Supergrass has resurrected themselves with their fifth full-length as a serious band with a lot to say complete with a stand-out garage-psych pop like "Kick In The Teeth" ("I just can't get my head around what you want"). Songs such as "Low C" and the percolating closing ballad "Fin" show that if anyone can emulate perfect Lennonesque melancholy, it's this British quartet. In fact, much of Road to Roeun sounds like latter period John Lennon, with fiercely intelligent but life-accepting lyrics set to sinewy but accessible rock music.

There are notable exceptions to this formula. The opening track "Tales of Endurance (Parts 4, 5 & 6)" is the most experimental, with vocals that come in at 2:00, and morphs from a spaghetti western soundtrack into a multi-part grinding Brit-blues. Few bands on major labels these days would try anything so risky right out of the gate on their belated come-back. They even throw in a geezing near-instrumental, "Coffee In The Pot," to prove they're not worried about commercial success much at all. They know they acquired their fans by their character; not by kissing the rings of programmers. When it pleased them to be pop, they were pop, and now are willing to "commit commercial suicide" as they sing here to keep pleasing themselves.