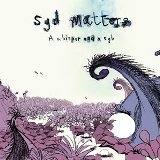 Someday We Will Foresee Obstacles / A Whisper And A Sigh

"She's been dancing in a topless bar. And she's been doing well so far." ("Black & White Eyes")

Like countrymen Nouvelle Vague, Syd Matters singer/songwriter Jonathan Morali seems to have exquisite taste in British music, and is able to assimilate the delectable pop-despair of certain artists and reflect them boldly in his own soulful, aristocratic folk-rock. But these are originals, astonishingly. Elements of the Divine Comedy, early Pink Floyd, and Kevin Ayers affiance the sublime accomplishments on these two re-released full-length albums, without impinging a real, formulated voice of distinction. In other words, these songs are as good as anybody's, without being an attempt at reinvention.

Not to knock Nouvelle Vague; a great record is a great record, and rock and roll has held that myth of the genius singer/songwriter too close to its now bloated breast. But it is startling to hear new songs being created that seem as equivocal to the mystical, obscure elite of brainy bedroom-sitters' true formal beauty. Morali claims to be initially inspired by Nirvana, and the autumnal desperation of Cobain's poetry infuses his predominantly acoustic writing and performing. "End & Start Again," the lumbering, burned-elegant fifth track from the second disc-first album here, A Whisper And A Sigh, sounds like maybe where the lactose intolerant Last Rock Star would have landed, if heroin and hangers-on had been tossed aside, feedback completely deleted. Meanwhile, the short but mesmerizing "City Talks" sounds like something Tim Hardin would have woven from an opium haze for the top of the charts in the late 60s.

Only in his mid-20s, Morali also credits Goth-father Leonard Cohen as an influence, and on the inside CD tray of this delightfully generous two-fer set, the phrase "Through the blizzard, through the blizzard" is handwritten, reminding one of Cohen's phrase "the blizzard of the world taking over." There are a lot of records and movies these days that extrapolate post-adolescent anomie, I don't even need to name them, but these 23 songs don't seem like soundtracks to trendy slices of suburban sad-beauty, but seem like full resonant movies in themselves. It helps that the violin, mellotron, and guitar playing never misses a perfect emotional note beneath Morali‘s storytelling, though I have to admit that like Cohen, the squirrelly synthesizer sounds throughout are a little too cute for the material.

With just two albums, Morali has established himself as a foursquare Parisian hero-troubadour of immense stolidity and potential. There are enough mix tape songs here to justify at least an 8.5, especially the cleverly satirical "To All Of You (American Girls)" — though it does seem he's still got his masterpieces left to create. The first couple listens to Someday We Will Foresee Obstacles and A Whisper And A Sigh may be taken for granted as brass hearths; but it doesn't take long for their poetic fires to flicker forth.