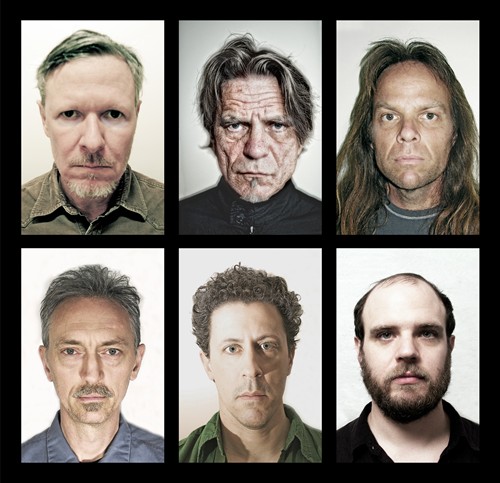 Sometimes he who says it pretty much first, says it best. As underground music maven Byron Coley (Forced Exposure zine) scribed on Swans in the January 1987 issue of SPIN, "Records by the Swans have so little to do with pleasure, fun, and the, uh, joy of living that it's no off-a-log-explainin' that they always suck at my ear like some wax-hungry insect.  … It sounds dumber than vom to say the Swans are 'important' and thus worthy of your time, money, attention; but unfortunately this statement is truth."

I don't remember what "dumber than vom" means, but this was the 80s and it was scary – and Swans were even scarier! Headed Lord of the Flies-style by a tabasco-in-his-veins Michael Gira, these musicians weren't the trippy folky cult rock cool bands he'd been luring kids to listen to the past couple of decades. This Swans was as influential to my tribe of now-geezers as Xiu Xiu has recently been in spawning a certain ennui-infused art rock thang, but massively, all-muscley more-so.

And that Swans — the evil sounding, barbarically control-freakish tribe of clatter and grunts which released epics like Holy Money (which BC was describing up there), is taking further swings at God on their new double CD, The Seer. Following up classic Swans on 2010's My Father…, the cosmic daddy issues just won't die. Lots of victims, mostly of their own cocky/cockeyed misguided faith, gassily losing their religion on lit-cigarette-butts-in-the-backyard-on-your-feetsoles "93 Ave. B" and "Song For A Warrior" (guest starring Karen O!). I just picked the package up this weekend and it's like a bad acid trip during a botched assassination that never runs out of ammo. Jarboe, Michael's toughened-up, band boot-camp broken PTSD-partner, has come back to put come "voice collage" on it too, so it's throat-bliss and blood all the way.

If you think you dig the dark stuff, come out and see a Master handle it. I don't mind being tortured as long as it's by someone who truly knows how to do it and hasn't gone soft. This Mad Man Michael knows exactly what buttons to push; he's not hiding out playing the same campy game over and over again. His various experimentations with sweet musical carrots have made his punishment stick sting that much harder. Thus, it's no exasperated, desperate hoax attempt at noise-trauma: it's the real thing. Think you can handle it? Then drop us a line at tig {at} threeimaginarygirls {dot} com with the subject line "IWantToSeeTheSeer" sometime in the next week. We'll close out the submissions at 5p on Wednesday, September 5th and pick a winner +1 to head to Friday's show.