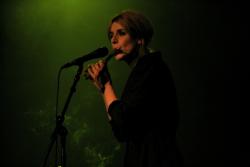 “The Swedish Girls Pop Tour” is how opening singer awkwardly described the event she was a part of. It is a North American tour featuring Ternheim as well as pop-star-in-the-making Lykke Li and chanteuse El Perro Del Mar. All are from Sweden and all were at the Triple Door on Thursday night. It was quite the show, to say the least.

Ternheim, while good, was overshadowed by the two stars that followed her. She played acoustic, folk pop songs and she was nice. Good voice, good lyrics, wouldn’t mind spending some more time with her songs. She played by herself so she had to have a drum beat looped from her iPod for a couple of songs while she played her acoustic guitar or the grand piano on stage. She nervously asked a few times if people were enjoying their dinner. I don’t know, maybe she was intimidated by the Triple Door (although she has no reason to be – it makes everyone sound good and the audience usually leaves happy). I don’t want to say that she was along for the ride but I would be surprised if anyone was at this sold out (or pretty damn close to it) to see her.

Lykke Li was second and she was not along for the ride. She is a star in every sense of the word. Dressed in a floor-length dress with lots of necklaces (including a peace sign one) and with straight, shoulder-length hair, she looked a bit like Avril Lavigne’s hippie twin sister. I don’t mean that as an insult by any means. She has a great, breathy voice that makes her soft but fun bubblegum pop songs sound intimate. When she played her dance songs (“Little Bit”; “Dance, Dance, Dance” and “I’m Good, I’m Gone”), it was a lot of fun to watch her move across the stage. I think a lot of the crowd wanted to get out of their seats and dance with her. Those three songs were big and expansive when she performed them. They have been in very high rotation on my iPod for the past few weeks (and not just to prep for the show) but mp3s and my stock earbuds hardly do justice to them.

Joined by headliner El Perro Del Mar on two songs (“My Love” and “Hanging High”), Lykke Li was wonderful and easily the best performer this night. She was backed by a full band and played some of her own percussion (tambourine, triangle, etc…). She is only 22 years old but could very well be a big, big star. Her debut record, Youth Novels, was released in Europe this past winter while we just got her Little Bit EP last week. Lucky Europeans.

El Perro Del Mar was a worthy act to follow Lykke Li. Whereas Li was fun and upbeat, the one formerly known as Sarah Assbring was sultry and steamy. Burning incense from the stage throughout her set and dressed all in black (stockings, miniskirt), El Perro Del Mar was quite lustful.

Playing songs from her latest, From the Valley to the Stars as well as from her 2005 self-titled release, she was also backed by a full band. The intimate setting of the Triple Door and its first rate sound system made for an ideal environment for the songs to flourish.

My favorite moment of her set was when she played the upbeat pop song “Somebody’s Baby." It had a simple chorus and is easy to sing along to. On the album version of the song it sounds like it could have been a radio hit 50 years ago. If it played on KBSG (the Seattle oldies station) during the summer, I doubt anyone would notice it was out of place – or complain about it.

Lykke Li returned the favor from earlier by singing the backing harmonies on two of El Perro Del Mar’s songs (“Inner Island” and “You Can’t Steal a Gift”). Together, they closed the evening with a cover of Wendy Rene’s 1960s soul classic “After Laughter (Comes Tears)”.

El Perro Del Mar and Lykke Li are two very different performers but they both played great, well-received sets. Pairing them together and sending them out across the US was a really good idea. Before the show, the angelic waitress at the Triple Door told me that this show would be quite long (three hours) but after the two stars completely nailed a duet of Wendy Rene’s 1960s soul classic “After Laughter (Comes Tears)” for the encore, I wouldn’t have minded if the night went on forever.