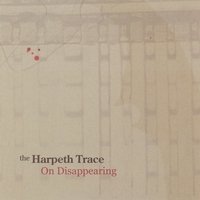 On Disappearing is an apt title for the debut album by The Harpeth Trace. Shortly after recording the disc in December 2006, group leader/singer/guitarist, Josh Kasselman, migrated on a trip East for about six months where he spent time in Laos, Thailand and Cambodia before his bandmates dragged him back to the states with the finished product. The record was recorded, mixed and produced by Raymond Richards, known for his work with Mojave 3 and Brian Jonestown massacre.

It is a solitary sounding collection of songs, On Disappearing. Musically, it's a strong record. The guitars swirl and ebb in generous pools of reverb and tremolo and are backed by an impressive drummer, Rob Poynter. Add in some low end and lowly mixed bass guitar and psychedelic production and you have a record that sounds, for the most part, like it was recorded in the late sixties. "The Better Mr. Green" is a slightly eerie song that is reminiscent of something from Pink Floyd's A Saucerful of Secrets. "Summer, Two Weeks" carries with it a similar feel. Dissonant electric guitar with a shade of feedback lead the track and the almost non existent vocals of Kasselman are sung before a dreamlike keyboard is added to bring the song to a close.

With the apt title and the solid recording and mixing, the album that is a haunting and ethereal outing for this LA / Phoenix band.