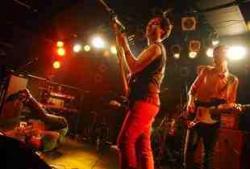 Do you ever remember going to a show that was played to a nearly empty room and spending the whole evening wondering what in the world kept everyone away? I’ve had several of those moments (mostly when friends’ bands have played), but one that sticks in my mind is when Switches, a great, newish British rock band, played their first show in Seattle at Chop Suey a few months ago.

It was an early show on a Friday night last August, with doors opening somewhere around 5 pm. If there were 25 people in the cavernous club, I would have been surprised. The entire paying audience could very well have consisted of Imaginary Kiku and me. Yet, Switches didn’t seem to visibly let the lack of an audience affect their set and still trudged through admirably.

When I found out that they were coming back to tour the states with the Bravery, I was intrigued. What kind of energy would they bring playing to larger crowds, with a band that has built a fan base?

I had little interest in watching the Bravery (and so I didn’t). I have seen the Bravery live a handful of times but never found them terribly compelling. I was never sold on their post-punk sound and always felt that they are too derivative of New Order for my taste and I generally prefer their contemporaries like the Futureheads. Plus, singer Sam Endicott reminds me too much of someone wanting desperately to look and act like Morrissey. Yet, before any angry Bravery fans fire of an e-mail berating my lack of taste, consider that since this show was inexplicably sold out in advance, I’m in the minority.

Moreover, this review isn’t about the Bravery, it’s about Switches.

Switches are five hipsters from London. They look like the Strokes: shaggy hair, ironic t-shirts, etc., yet their clichéd look belies their sound. Listening to Switches is to hear elements of nearly every British rock band I’ve bothered to care about, from the Kinks up to the Arctic Monkeys. They have catchy pop rock songs that you could easily imagine finding their way into heavy rotation on any “alternative” radio station. They kind of reminded me of a British version of the Lashes. Yes, Virginia, I mean that as a compliment.

Their set for Friday night at Neumo’s, where they were opening the sold-out show for the Bravery, was eleven songs in about 40 minutes. Singer Matt Bishop remarked about this show being an improvement over their last stop in Seattle, but then conceded that the large crowd was there to see the Bravery. They were tight and polished and their songs sounded like they were constructed to be hits, but their swagger and jerky guitar parts were infectious.

Their debut album, Lay Down the Law, is scheduled for release on Interscope in March, around the time they play some shows at SXSW. I’m curious to see what kind of interest they’ll generate in the music press, both in print and online. Right now, the only record available in the US is the three-song “Drama Queen” single/EP. That song is full of hooks, lots of ooh ooh oohs, and catchy lyrics. It’s the stuff kids these days eat right up. Here, accessibility is no vice. I enjoy listening for the influences, which are sometimes overt (especially elements of 1990s Britpop bands like Oasis and Blur).

Switches could be a hit band in 2008 if the right stars fall into alignment. They aren’t terribly original (and there isn’t anything they do that the Arctic Monkeys aren’t already doing) but they’ve been studying the right records. That should count for something, right?