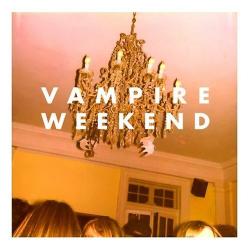 Who knew? When we were all listening to Blind Melon and Stone Temple Pilots, the kids, they were listening to Paul Simon and old Peter Gabriel. Or, at least, that is what we’re lead to believe. Just pop in Jens Lekman’s new one or the Vampire Weekend debut and you’ll be wondering Ladysmith Black Mambazo is waiting around the corner with Youssou n'Dour. Vampire Weekend, in fact, calls their sound “Upper West Side Soweto,” which I suppose is fittingly clever/not clever for a New York band, but Vampire Weekend is a lot of fun, if anything, and marks to me the first album of 2008 that I’ve wanted to hear again and again.

I suppose there is nothing terribly new in Vampire Weekend’s sound. It can pretty much be summed up like this: The Strokes record Graceland. I really don’t think any additional description is needed. Is that necessarily a bad thing? No, but you really do know what you’re getting and if you don’t care for the Strokes or Paul Simon’s love letter to Africa, well, then maybe just keep on moving down the “V’s” to the Violent Femmes or the Verve. I hear people like those bands. As for Vampire Weekend, the band and the album, if you take that route, you probably won’t regret it because the album is loose, entertaining and a good panacea for the dark winter weather.

“Mansard Roof” opens the album with a light and flowing mix of guitars and organs, again taking a bit from the Strokes stable and mixing it with the neo-African sound that Simon and Gabriel pioneered (well, in terms of making it mainstream for scaredy middle class whites). The song is catchy as all heck, and that is one of the strong suits of Vampire Weekend: they know how to write a pop song. Sure, you might not have any idea what they are singing about, but you want to sing along. See “Oxford Comma,” a loving tribute to … grammar? Alright, maybe not grammar specifically, but you can tell this is elitist intellectual music that the nerds will eat up. “Bryn” takes on more of the melody and tones of their so-called “Upper West Side Soweto,” and for a bunch of Ivy League educated New Yorkers, they do a pretty decent job with it, albeit in that sort of David Byrne pillaging sort of way. There are a few odd turns, like “I Stand Corrected,” a track where the band must have decided they desperately needed to record a Bloc Party song, all to mixed results. And their new wave “One” is well, just somewhat irritating.

The real high points on Vampire Weekend are songs like “A-Punk,” pretty much a straight-up rock song that fits in well with the new generation of post-New Wave bands like Tokyo Police Club or Islands. The counterpoint to “A-Punk” is the alarmingly Simon-esque “Cape Cod Kwassa Kwassa,” which beyond the straight outta Graceland sound is also horribly hummable. The song has an elaborate hand-drumming breakdown in the middle with some downright Sigur Ros-like vocalizing, but somehow it all holds together. (Now, what entirely this song has to do with the Cape is beyond me, but they return to the Cape on the album closer, the so-so “Walcott”). “The Kids Don’t Stand a Chance” is the closest you might get to Peter Gabriel’s side of the African aisle (with a bit of the Night Falls Over Kortedala sound), and what you get is a pleasant-enough (albeit a little overblown) power ballad.

So, alright, you’re not going to be thinking Vampire Weekend is pioneering any new trends with Vampire Weekend beyond spreading the South African pop revival to the States. However, for a debut album, Vampire Weekend is a remarkably solid collection of pop songs that stick with you for longer than you might have expected when you first put on the album. It is hard to tell whether Vampire Weekend is just another NYC import-to-the-UK (they’re big there!) flavor of the month, but hey, at least you’ll get a few weeks of enjoyment out of them before you’re told that they’re not cool anymore.