SXSW – The View Without the Music

I spent much of the last week attending South By Southwest (SXSW) festival. Best known by many for music, I made the trip mainly to watch film – and watch movies I did, notwithstanding the hundreds of distractions posed by this event that truly puts the festive in festival. There are a ton of things competing for your attention, from music and interactive events to film panels, to what seems like hundreds of parties. And that’s ignoring folks on literally almost every street corner offering free food and alcohol, seemingly trying their best to keep you from making whatever was on your original plan.

So, what does one do during 6 days at SXSW?  Here’s a list of some of the options and opportunities:

– Watch at least 20 movies. And catch many of those at the Alamo Drafthouse, probably the best theater chain in the US due to a combination of solid projection, a no screwing around policy against talking/texting, and full food and alcohol service.

– Drink too many milkshakes while watching movies (which is totally related to the bullet point above).

– Eat and drink pretty well for free whenever not watching a movie – preferably at one of the many Austin food trucks employed for the week by companies such as Groupon.

– Actually become a fan of Sobe products due to their ever-present beverage and bar giveaways. By the end I was convinced that Sobe is a good mixer for whatever drink you’re having.

– Marvel at the wide variety of folks on the street from the movie geek to the music hipster…to the naked (no, not joking).

– Chat in lines with mega-fans, Austin natives, and folks in the industry. Personally my favorite part of the festival experience, but most especially in Austin.

– Hang out at parties that feature things including drunken metal karaoke, cricket eating contests, and Greta Gerwig (though damnably I missed the last one to see a film, STUPID! STUPID!).  By the way – not all at the same party.

– Commiserate with other equally spoiled SXSW attendees about how the IFC Crossroads house is lame this year because they only have free soft pretzels and beer, vs. last year when they also had coffee and breakfast tacos.

– Briefly worry seriously that you’re about to be in the midst of a mad crush of people waiting to see Pee-Wee Herman and get free ice-cream from his personal ice-cream truck.

– Walk between venues just because Austin has beautiful weather this time of year.

– Take a lot of photos of all of the above. And then still wish you’d taken more.

Really, the only option not on the table is to get a full night’s sleep. With screenings starting at 11 and typically ending close to 2am, that’s not a lot of shut-eye, even if you don’t get in a line for guaranteed express passes to the movies of your choice around 8am.

All that precedes this is my super, super long-winded way of saying I’m pretty impressed with myself for catching as many films as I did. The final tally is 23 SXSW films (or shorts programs) while on the ground. Add to that two things I saw before arriving in Austin, and it means this year I caught 25 of SXSW’s film related offerings.

Over the next week I’m planning on starting the daunting task of writing something on every film I’ve seen, and posting as many pictures of the events as possible. For now, here’s a few things from SXSW that you may want to put on your list of things to keep an eye out for. Though I’ll be sure to try and post on Three Imaginary Girls if any of these roll into town. In the meantime, you can already catch Paul in theaters.

SXSW is a heck of a great time, and for such a large event a pretty accessible experience with a little planning. Even if you’ve never thought much about it for the music segment, I assure you it’s worth adding to your film bucket list. And if you can’t wait until next March, there’s always its more contained but equally awesome stepbrother Fantastic Fest coming up in September…

So here’s a bit on some of my highlights. If you’re thinking of going next year and would like some tips feel free to drop me a line. 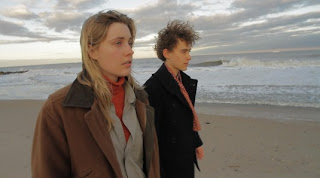 The Dish & the Spoon – Greta Gerwig dealing with stuff on a journey kicked off by relationship troubles – ’nuff said.  Actually, I’m pretty sure I’m going to try to say considerably more about the film at some point.  But honestly, it’s going to boil down to something pretty similar. 😉  Olly Alexander her co-star (seen previously in ENTER THE VOID) is also quite good. 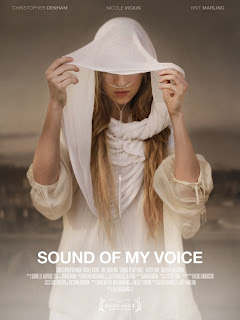 Sound of My Voice – Brit Marling (who also co-wrote the script) makes a strong impression in this film about a couple attempting to infiltrate her cult. They view her as a dangerous person who while never leaving the basement of a suburban house recruits followers who believe her story that she is a traveler from the future. And we all now that sort of thing never ends well, right? I mainly caught this film because I had nothing to do between other screenings, and it turned into one of those serendipitous festival mistakes that validates one’s faith in the universe.

I was pretty darn tired when the film started, but I was completely awake after the first few minutes. Simultaneously fascinated and creeped out by the goings on. Even by the end when I was pretty sure what direction things were heading, the final reveal still gave me the willies. Dramatic tension breaks within the movie used effectively with I’m confident the most surreal use of a song by The Cranberries ever committed to screen.  The camera loves Marling who also appears in another of my SXSW faves – Another Earth. Limited in locations but sharp and crisply shot, I was pleasantly surprised learn it was shot with the Canon 7D.  And boy did it hold my attention – while scaring the crap out of me. Well played… 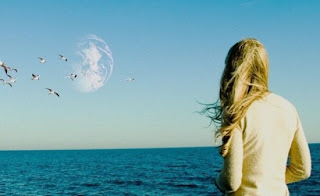 Another Earth – One of those fine films that uses a science-fiction premise to tell a story mainly about the human experience.  How would we feel if we learned there was a second life-sustaining planet in our universe? What if it was in our own solar system, rotating just out of sight, always blocked from our view by the sun?

Well, of course like the people in the film, we’d probably name it Earth 2 in a show of extreme geo-centrism. But if and when that day comes, be sure to pull over while driving before staring at the new planet (suddenly visible due to a gravitational shift) in the night sky.  Because if you don’t you may cause a catastrophic accident that results in the death of someone’s wife and child.  Brit Marling plays a student who on the eve of her college career makes that mistake, killing a man’s family. Years later she goes to apologize and ends up more deeply involved than intended. In the backdrop of this looms slowly revealed “reality” of Earth 2, which at least for a while has been a literal mirror image of our own.  What opportunities does it pose for those who have lost, for those who want to speak with another version of themselves?  Big issues such as these are explored implicitly in what other than the fantastical device is truly a small, very personal story.  An extremely well executed one. 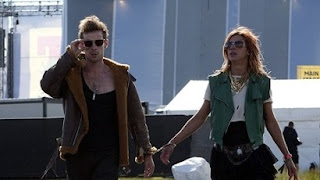 You Instead – Shot on location at Scotland’s “T in the Park” music festival, You Instead manages to mashup the best aspects of a adrenaline pumping concert picture with a relationship origin story along the lines of Before Sunrise (without making you face any potentially ambiguous feelings you may have about the watchability of Ethan Hawke). Two bands meet, one a group of women, the other a male duo – and seem to take an instant dislike to each other. Due to a series of events that almost make sense in context, the lead singer from one band ends up handcuffed to one of the female performers.  Chained together they do their best to go about their day – which of course turns into something unexpected…at least unexpected if you’ve never, ever seen a movie like this.

Though I’ll admit, I can’t quite recall another example where ‘meeting cute’ involved handcuffs.  The filmmaker effectively captures the power and excitement of the concert’s live performances making the music festival more than just a high concept backdrop.  Plus there’s enough mini-stories involving the other band members to keep things diversified. In some ways it reminded me of last year’s SXSW entry This Movie is Broken – but overall, I found this to be a more complete experience.  Please note I’m a total sucker for these sort of love stories – so I may have been easy prey. 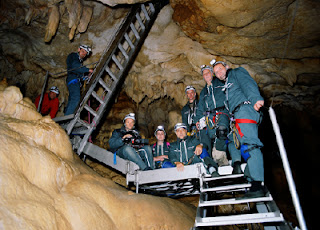 Cave of Forgotten Dreams – Werner Herzog takes viewers deep into the Chauvet caves which house the oldest known drawings in the world. Located in Southern France and unavailable previously to all but scientists with a need to be there, Herzog captures some amazing footage to which he adds his signature narration style. Probably the only movie I’ve ever seen that truly needs to have been made in 3D. The drawings are on a cave wall and the pictorials use the natural dimensions of the surfaces to tell their stories – shot in 2D they’d be fascinating, but missing something. The film is beautiful to look at, though clearly a Herzog piece.  He even manages to find a way to stick in albino alligators at the end. 😉

One person I met afterward felt the long lingering shots and then re-shots of the same drawing made the film boring. For me, being forced to stare at the art brought out things I wouldn’t have noticed on a quick glance.  Cave of Forgotten Dreams isn’t something I normally would seek out – but if this film hits a theater near you I would highly recommend not making the mistake of skipping it like I might have had it not been for SXSW. 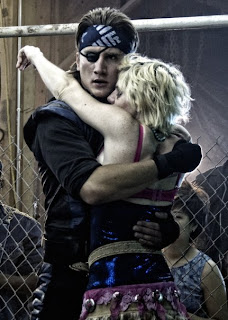 The FP was one of the films I was most looking forward to seeing at SXSW.  I enjoyed it, but more importantly I think it’s seriously growing on me with each passing day.  I’m hoping to get another chance to see it again soon as I have a strong suspicion that with a less sleep-deprived mind I might appreciate it more. Or maybe a well rested but slightly altered state would work even better. The film’s set in a world where gangs reign supreme and settle their scores through a version of the video game DANCE DANCE REVOLUTION (DDR). Something like that is destined either for total awesomeness or screaming while aflame into the side of a mountain failure – which is the sort of high risk/high reward proposition I love about the film festival world (see SexyKiller for another example).

Turns out it’s an impressive send up of too many to name genres of 80’s cinema, which by playing things 100% straight is also pretty damn funny. The FP definitely lags a bit mid-way, as even a fairly tight production is going to drag a bit when it’s all roughly the same joke. Because of that it falls short of perfection – but the ride is well worth taking. Seriously, “for reals” as they say in Frazier Park (aka The FP). A phrase I guarantee (based on personal experience) you’ll be saying repeatedly for at least the next week to folks you saw the movie with.  I’ve written up a longer description you can checkout here – if only to commit the experience to word lest I later think it was all a SXSW fever dream.