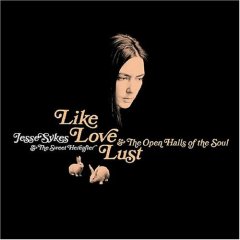 Like, Love, Lust & the Open Halls of the Soul

Although I may not know Ms. Sykes personally, I can assume that, like any other artist, she is at least somewhat concerned with maintaining relevance. I mean, your fan base is either going to grow with you or grow away from you, right?

When Jesse Sykes & the Sweet Hereafter released their breathtaking debut Reckless Burning in 2003, it became the sleeper hit of the alt-country scene, propelling Jesse and guitarist Phil Wandscher to small but important local celeb status, and it enjoyed basking in the glow of a light that, for better or for worse, was beginning to grow dim. Let's face it, the road that had already been paved by such acts as Wilco, Neko Case and (ahem) Whiskeytown, was winding down to a conclusive dead end. Don't get me wrong, Americana has always and will always be a pervasive influence on music made in, well… America, but it's the fickle attention span of the casual music fan that is in question. To put it bluntly: we bore of things easily.

So it was with Syke's second release, Oh, My Girl, which I certainly felt was more of a companion to rather than a departure from Reckless Burning, that I began to worry just a little for Jesse's future. That she is one of the more talented vocalists and songwriters to come out of these parts in the past few years is not debatable. What was debatable is whether her audience was going to continue to buy into the formula. And the formula is simple: take one part gothic-noir diva with the mysterious beauty of a young Emmylou Harris (and the lisp of Sean Connery); add one part Telecaster guitarist with "Ryan Adams" street cred (and attitude); top it off with two parts up-and-coming (and going… to Portland with his new found love for Laura Veirs and his new found paycheck from The Decemberists) local producer with a singular, unmistakable sound: mix it all up in a cocktail blender at Hattie's Hat and serve with a generous portion of financial backing from a record label fresh from the million-dollar plus sale of Death Cab for Cutie, and you have a winning formula for guaranteed press intoxication.

But with interest in Americana music currently on the "so last year" trend in the indie rock community, what's a girl to do but get her groove on? And good for her. It's liberating. So would I call Like, Love, Lust… a total departure? Not by any means. However, it is just enough to move her audience along with into her next phase of songwriting exploration. And for those of you who are drawn more towards the upbeat 60's Americana Rock sounds found on this record, I'd say the ride is about to get really good.

Jesse's one guarantee to her listeners is that she always writes from the soul. Her songs are highly internalized, and she pours her heart, her fears, her regrets, and her insecurities into them. When she sings lines like, "Is this still a good place to be/if it feels the same how will we know if it's breaking down?" and "Don't you wish that someone wanted you that way today?" you get the feeling that she is sincerely hoping for answers, and that she's engaged in a dialogue with you, the listener. There are some truly breathtaking moments on this record, such as on "The Air Is Thin," Jesse is joined by Swedish folkie Nicolai Dunger and a rousing chorale, escalading into a rather stirring finish (on what could have otherwise become a common ballad). Similarly, "How Will We Know," is accented nicely with crunchy percussion and well-placed harmony vocals, and "Hard Not To Believe," a track that's probably closest to some of her earlier material, features some of Phil's best guitar work to date.

But while Like, Love, Lust… is an exceptional record, I will venture outside of the adoring press mosquitoes swarming around it and say with some trepidation that I have a hard time taking it all too seriously. Perhaps Jesse intended it this way, but when I hear her half-talking, half-singing on "Spectral Beings," and "Aftermath" in a quiet but ultra-clean recorded whisper, along with her overly-affected lisp, I just can't help but compare it to a Disney voiceover. I'm sorry. I'm sure she intended to be mysterious in sort of a "Roger Waters' Pink Floyd The Wall" sort of way, but to me it comes across as being too animated, and a little silly. Likewise, as much as "You Might Walk Away" is the obvious radio hit, I have a hard time believing that it didn't take a little coaxing for Jesse to so willingly record essentially a twee pop song. All in all, the seductive "aaahhhhhhs" of her former albums have necessarily been replaced by more upbeat "Lah, Lah's," the production quality (and undoubtedly the studio budget) has doubled, and Jesse's delivery has been perfected like a fine wine, albeit served with a small side of cheese.