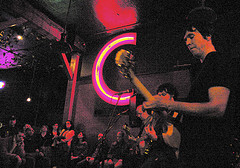 Shake Some Action! at the Comet

The Comet is a great old bar, a Capitol Hill classic, really. After a post-grunge heyday slump, the grimy Comet has seen a resurgence of late, thanks in no small part to the outstanding booking efforts of local DJ Mama Casserole.

I heart shows at the Comet. Rock on the floor. No lights. No fuss. Just driving rock in the corner at one of the oldest and likely most haunted bars in Seattle. Ahh, if those walls could talk. Especially the ones in the scary bathrooms (I hear the men's room even has a gloryhole!).

Tonight's bill was no exception; Mama carefully paired two Seattle melodic dark-wave faves (the new Shake Some Action! and a reunited Black Nite Crash), with Portland's Go Fever and LA's The Clean Prophets. A fine and dandy Thursday night bill for sure.

My only complaint is an old imaginary gripe: I just can't get into four-band bills on weeknights. It's one band too many, in my humble opinion.

But I'll cut her some slack and quit my betching. Onward to the rock!

First up on tonight's stellar lineup: Go Fever, a three-piece from Portland I had never heard (or heard of) before tonight. They initially didn't grab my attention so much, reminding me musically of Kings of Leon a smidge, minus the twangy vocals (after all, Go Fever is from South of us… but still, Portland's not exactly that Southern, now is it?), with a decided Northwest underbelly of darkness and dampness.

But as the set continued, their live set intensified, things picked up and suddenly the band seemed to tap into this Brit-poplike sensibility — including a suspicious British accent I suddenly noticed on frontman Tony Hilsmeier's vocals. It became my mission of the set to find out: was that accent real? (answer: nope). But the rock clearly was real, and overall Go Fever kicked off a strong set for a long night of bands.

{And it was definitely intimidating to go first. Somehow the layout of the Comet had everyone quietly fixating on the band (versus the usual bar strategy of drinking/ chatting during bands). My imaginary friend Pauline who attended the show with me commented on how the Comet looked like a roomfull of critics: sober, attentive, intimidating. It continued that way pretty well into the night. Check out that photo. Don't we look intimidating (in a dark and blurry sort of way?}

Shake Some Action! arose from now-defunct Seattle band the Jeunes. Here's how legend tells it: with the demise of the Jeunes, front-man/gutiar player/songwriter James Hall retreated home to his imaginary fortress, which just so happens to have a recording studio. There he recorded some of the best Jeunes tracks and a bunch of additional pop gems, playing all the instruments on the record (with the exception of a few guitar solos like the ripping one on "Damaged," which guitarist David Bos recorded back in the day in the Jeunes practice space). Hall then released the record under the moniker Shake Some Action! (after the Flamin' Groovies song that, I must confess, I don't know)

And while I'm fessing up: yes, my fella is (and was) in both Shake Some Action! and the Jeunes. This means I've been hearing these songs for years, and when the Jeunes broke up last spring, I was pretty bummed out that I'd never hear them again. Or so I thought! Hearing them performed live now, it felt like what high school reunions are supposed to be — reconnecting with long-lost friends who you've actually thrilled to see. And judging from the peeps I saw at the show, I wasn't the only one to feel that way; loads of the old Jeunes fan-crew were at the Comet, pleased as punch to see the show (Patrick Partington of Pleasurecraft, I'm especially looking your way).

A few highlights from the set: "Someone Else's Friend" always makes me think it's a lost track from Sugar's Copper Blue (a desert island favorite of mine), and was killer live. "Sound of Your Mind" sounds like a lost track from Teenage Fanclub's classic Bandwagonesque (or so I read somewhere). Another favorite, "Without You," reminded me of early jangly R.E.M., and "What Do You Want Me to Do" breaks down the agony of an unhealthy sexual tension so deliciously ("You think your duplicity's not showing / I feel my frustration growing / But I don't want to say goodnight to you / So what'dyou want me to do?"). I generally need to play the song at least three times in row when listening to the record because it's so awesome (a feat I sadly couldn't replicate in the live show).

The set was big rock fun, and I was super excited to hear Black Nite Crash afterwards, to relive the days when the two band frequently shared bills together! But sigh, another band came in-between. My photographer friends left, grumbling about the poor lighting at the Comet ("throw us a bone and put in a 40 watt!") and I went outside for air, only to somehow get immersed in a conversation about stick shifts and biodiesel with a pal outside during the break… and next thing I knew, had missed most of the third band, The Clean Prophets. Whoops.

I will say the Clean Prophets had a crazy limby drummer who pounded ferociously on his kit with arms that I'm pretty sure were longer than my entire body. And peeps were dancing their hipster butts off. So I'm
sure they were quite good.

As for Black Nite Crash, maybe it's just been the delay since seeing them last (at least two years, methinks!), but daaaaaaaaamn. They sounded fantastic. I love the new drummer. Jim's crazy reverbed voice has never sounded so deliciously dark. What a treat!

First Black Nite Crash reform for a show, and next-up, a Jesus and Mary Chain reunion at Coachella. A coincidence? I think not! Was this show a one-time shot for Seattle's favorite shoegazers? I hope not! I plan to investigate this question further / beg the band to continue playing live shows. Stay tuned for deets.