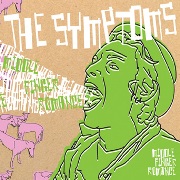 Just the song and album title itself screams punk rock, but not the Good Charlotte/Simple Plan la-de-da punk rock lite that's infected the tweens of America without older siblings to introduce them to The Clash and Sex Pistols. This is punk rock in the vein of Mike Muir declaring all he really wanted was a Pepsi. Add to the mix that it's a woman (vocalist Sonya Decman) singing about her middle finger romance and the song takes on a completely different double entendre meaning.

Like all punk music the songs are deceivingly simple but they pack one helluva wallop, making for a record filled with 11 fast and dirty tracks. "Books About Trigonometry" is about exactly what the title implies. As boring as a song about math may sound, and depending on your musical presence math rock itself, there is no need to worry. The song is neither math rock nor boring; it is two-minutes of blazing rock. "Leda Hyena," the record's closing track, is a punkish ode to Decman's dog. While the opening song "Seatbelt For My Moustache" is not only a fun concept to think about it is a great way to open an album.

"Middle Finger Romance" is definitely a punk record but The Symptoms' music isn't as volatile as it could be. The group has a reputation for putting on a raucous live show so if you're disappointed by the lack of loudness and aggressiveness on the record be sure to catch them next time the make it to the Emerald City.