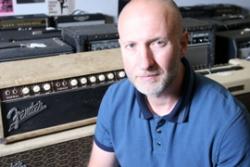 From the Stones to The Stooges it's almost always a surefire bet for a good time when you get to see an living legend in concert. When Bob Mould came to Neumo's on a beautiful fall evening earlier this month it was no exception.

While he's not in the same legend category of Jagger or Iggy, Mould — the man behind everyone's favorite alt-rock originators Husker Du, the beautifully saccharine-flavored rock of Sugar and a few other side projects — made sure his legend status was felt and appreciated. Sure he's played in Seattle several times since the disbanding of both Husker and Sugar, but at this show he was going to offer something different and everyone knew it. On this tour, which is in support of his latest solo record Body of Song, Mould played songs from his vast solo catalogue, his Sugar repertoire and Husker Du material all in the same set for the first time in his career.

This meant anticipation was high as the crowd, which consisted mostly of rock fans in their mid-20s to late 30s (like this reviewer), could hardly wait to find out what surprises were in store. Unfortunately the surprise didn't come in the form of plenty of Husker Du songs; instead Sugar and Mould's new album dominated the set. He opened with three songs in a row from Sugar's classic album Copper Blue. While it was great to hear Mould dust off the Sugar material, it was a little disappointing that Husker Du didn't dominate the show.

"The Act We Act," "Good Idea" and "Changes" kicked things off and then he delved into his new album with "Circles," a song that has been played on (gulp) The O.C. Having his music associated with the 90210 for the 2000s will likely be a good thing for Body Of Song; it definitely didn't hurt Death Cab any, but you've got to admit it's a bit strange to think of Husker Du's singer being featured on an O.C. soundtrack.

As for the Husker material that was played, it sounded great. Scratch that. It sounded flipplin' fantastic. "Makes No Sense at All," "Could You Be The One," "Celebrated Summer" and a few others were thrown into the 90-minute set. His band sounded close enough to the original Husker lineup to make the music not feel like lame cover songs, bringing out a strong sense of nostalgia while still sounding relevant in today's musical climate. It's easy to second guess the decision to not play more Husker material, especially considering seven songs from Copper Blue were performed, but Mould did hold up his end of the deal by playing Husker songs. So really nobody should be complaining.

On his blog, cleverly named Boblog, Mould declared the show at Neumo's as having the, "best mosh pit in the U.S." That's quite a declaration from a man who has certainly seen his share of grandiose pits. On the same entry he professes his love for Dick's Drive-In, so now we all know where we can spot him after the show next time he's in town. It's nice to hear he had a good time in Seattle and that he is not shying away from playing songs from his entire catalog of music live anymore.

Shiny Toy Guns, a four-piece glammish group opened with a set of that new new wave music that seems to be all the rage thanks to The Killers, The Bravery et al. In their defense, the young L.A. band played a damn fine set and if they had a record available at their merch table I would have likely walked away with one, especially if it had their spectacular cover of Depeche Mode's "Stripped" that they pulled off remarkably well on it. However, it was a bit puzzling why they were opening for a legend like Mould and not an act like stellastarr* or some other similar sounding band.