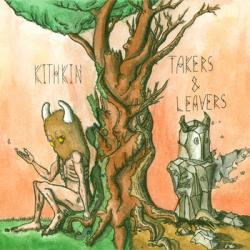 The benevolent tree spirits of Cascadia delivered press materials to the imaginary office on behalf of Kithkin, the energetic drummer boys who opened for Los Campesinos! at the Neptune  on February 4 (an event that filled both Kithkin and imaginary girls with primal joy). I used to hang with the tree spirits when I was a kid, so of course I had to check out their new friends.

Kithkin’s EP, Takers & Leavers, begins with an abrasive “Din;” one of three, actually. But like the Awful Din from the Phantom Tollbooth, “Din” improves upon acquaintance, and by the time “Din II” and “Din III” roll around, the noise feels friendly. Listening to Takers & Leavers, many quotes fromfavorite childhood books floated unbidden to mind. During the track “So Slow,” I was reminded that Aslan (who also parties with trees) is not a tame lion, really. Even the sketched-during-math-class album cover, with its vaguely cardiac tree in the center, is strangely reminiscent of both Where the Wild Things Are and The Giving Tree.

This is not to say that Kithkin’s influences are solely literary. Kithkin shout and play drums loudly. The cheerful energy of Vampire Weekend can be heard, especially on “Ampersand.” Kithkin’s raucously shouted choruses are much like Modest Mouse, and inevitably for such a percussion focused group, Kodo-style synchronies  make an appearance (especially in “Din II” and in “No Eyes”). In what must be a completely random coincidence, the vocals on “Goliath” are eerily similar to those of the Goth-tinged rock band Dommin. I feel that Kithkin approve of such random coincidences.

Whether it’s primal joy or just effervescent boy-joy, Takers and Leavers remains mischievous and playful even in its most serious moments. It’s impossible to stop grinning as you sing along to the line, “all of my friends are dying.”  Kithkin may not be tame, but as in nature, all is not chaos on Takers and Leavers. There is an organizing principle behind the music of this urban tribe of woodland creatures. The playing is tight, the vocals are strong, and for all their youth (did I mention that Kithkin are KEXP Sound Off! alumns?) the lyrics can be on the profound side.

Kithkin’s barbaric yawps are pointed. They eschew entitlement on “Goliath,” and “Treefell” captures the horror of environmental destruction and all the other “things you hate but don’t do shit about” in one sickening swoop. Kithkin admonish in the final track that too many of us are “living like we are already dead,” and without bothering to do anything as boring as preach about it, they offer up the antidote by exuberant example. Kithkin are vibrantly alive.