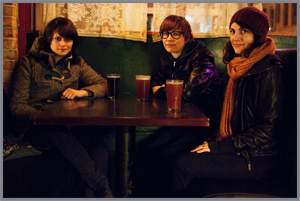 If you’ve never heard of Eighteen Individual Eyes before, you may not be alone — but if you don’t take a listen now, you soon will be. Irene Barber’s soaring siren call is so thoroughly appealing that it’s easy to ignore the hint of danger lying in the jangly, dirty guitars underneath. Although tender, their songs are eerily disturbing. It's a transfixing combination.

EIE’s talent was obvious on their early EP, Slightly Frightened, Mostly Happy. For their soon-to-be-released debut full length, Unnovae Nights, the group recorded with Matt Bayles (Minus the Bear) and took a big leap forward. You can hear how beautifully Bayles picked apart the intricate tangles of their sound on the track “Four Poses,” available to listen now.

You’ll have to wait until the March 6 release date for the rest of the album, but you can hear EIE play from it live at the release party on March 1 at The Croc. EIE will be joined by Empty Space Orchestra, Royal Eyes, and The Way We Were in 1989. If you’re really lucky, you’ll get to see them all for free: yes, we’ve got a pair of tickets to give away!

Just send us an email to tig {at} threeimaginarygirls {dot} com, sometime between now and the end of the day Tuesday {2/28}, with the subject line "Unnovae". We'll pick a winner and notify you on leap day that you're on the guest list +1 for Thursday’s show. Good luck!