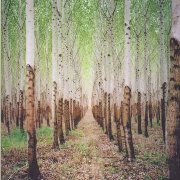 If you're like me, you probably spend a lot of time wondering about hybrids. Not the cars, but something like, "What would happen if I combined this ginger snap and that stick of butter?" or "I wonder what a half leopard, half komodo dragon might look like?" Talkdemonic might be a perfect example of such an exercise: "I wonder what happens if I blend my Mogwai with my Ratatat with a little Aphex Twin." Hailing from Seattle's little brother in Oregon (Portland… I'll just sit back and wait for the hate mail to roll in), Talkdemonic fill in that all important void between folk music, electronic and hip-hop — folktronic as I've been calling it for years — and the duo has created an album full of luxuriant arrangements that defy clear classification but demand to be heard.

Beat Romantic is the second full length by Talkdemonic, and it's full of little sonic dreamscapes that straddle the line between their instrumental (or semi-instrumental) brethren like M83, Ratatat, Mouse on Mars, and Sigur Ros. Where Talkdemonic differs is that they seem to have a more, dare I say, folksy feel to their sound that mixes straight-up sci-fi-style electronoise with a playfully plucked banjo like in "Dusty Fluorescent Lights/Wooden Shelves." Mix in a lush set of strings, and you feel like you've wandering into a record swapping convention gone mad.

This musical juxtaposition of an outwardly technologic side with an earthy side makes songs like "Junesong" a fascinating listen. Talkdemonic veer towards a more straightforward electronic sound akin to -Ziq with "Cascade Locks" that has a deep, thundering beat layered underneath synthesizes filled with tension and angst (as much as something like that can be). It the richness of the sound that Talkdemonic puts together that makes many of their works so satisfying. "Bering" is steeped in strings and quiet percussion that exude a mood of quiet contemplation and travel, like staring out a train window rushing across empty lands. The closing song, "Verite," takes a page out of the M83 playbook, starting with distance wildlife noises as each instrument slowly adds itself into the ever-growing sonic collage.

Unlike a lot of the newer instrumental indie bands, Talkdemonic tends towards the idea that to be succinct is the best course. Many songs clock in at less than two minutes and almost come across as exercises in sound rather than full-blown songs (e.g., "Human Till Born", "Skyscrapper", "Hillside Monarch"). At times you wish they would develop some of their ideas more fully, especially on tracks that show such promise like "Manhattan '81," which has one of more dynamic beats of the album over a unsettling synthesizer liner that draws you, but just as the song builds into a full melody, it's over. A few of their songs can come across as merely pedestrian instrumental indie rock, such as "White Gymnasium," which seems lost from a Mogwai outtake, but those moments are few and far between.

Talkdemonic do with music what Ansel Adams did with photographs: take a landscape and create a mood that surrounds it. There is an atmosphere that permeates all of Beat Romantic that is both melancholy and optimistic, all of which is conveyed better than many bands can do with words. It's as if the duo sat back and wanted to create an album that would be perfect for gliding across the country during the hot summer, watching the scenery move past you as you travel farther from what you know but closer to a new horizon that will bring the unexpected.