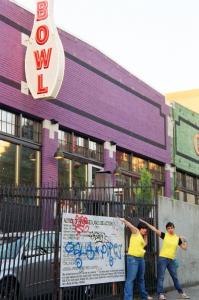 Gina Genius of Seattle female rap duo, Team Gina, walks up to the line. She takes the ball with both hands and swings it between her legs the way a little girl might. She releases and… another gutter ball.

When Team Gina agreed to take me and my lady (as Team TIG) on at the Garage on Capitol Hill for a fierce game of bowling, I thought we’d be in for some major trouble. The way the ladies attack the mic with their rhymes, I was led to believe they’d school us on the hardwood. Straight out of the gate, though, it didn’t seem to be the case. But then again, Gina Genius did warn me she was a terrible bowler. I just didn’t believe her.

Gina Genius was the first of Team Gina to arrive to the bowling alley. Wearing a little yellow hoodie, she seemed, well, normal. I was expecting (maybe) some indifference — possibly a little bit of divaness, possibly some yo-yo rapper attitude. In real life, though, Gina Genius was, for lack of better words, very sweet. Gina Bling, the other half of the Team Gina duo, arrived next, carrying her own bowling shoes. This is when I first detected trouble. Who brings their own shoes to bowl? Bling wears a matching yellow hoodie, and I almost think Team TIG should’ve dressed for the occasion.

Dressing for the occasion is something Team Gina know well. Their live shows feature numerous costume changes which apparently only apply to the physical aspects of the show. Bling says of picking out costumes before a show, “We have to [be sure to] wear a particular costume for a particular song because we’re going to do the splits.” The running joke in the early days of Team Gina’s live shows is that there were more costume changes than songs. Gina Genius ponders this, then realizes it was probably true. “We had four songs and six costume changes.”

Now it’s my turn to bowl. I take my stance, ball in hand, and throw it down the lane. Gutter ball. I’m hoping the other half of Team TIG makes up for it. Gina Bling takes her turn, releases the ball Bill-Murray-Kingpin style, and knocks down all the pins. Maybe, I think, we might be in for a close game after all. Gina Genius tells me this isn’t a new thing, this day and night of athleticism between the two. She says that while during a particular game of basketball, she was the worse player, yet Bling was the best. Bling later tells me it was all about the style, and it was really just a bunch of “queer kids with knee-high socks and headbands” posing while dribbling a ball.

For most people who have seen, heard, or read about Team Gina, may immediately think Lesbian Rap. But the truth is they’re rappers. No label necessary. They simply happen to be lesbians, and therefore write about things lesbians encounter, although their future may play a different tune. “Our next album is going to be maybe not so gay,” Bling laughs. But sometimes writing what you know is easiest. Bling continues, “We hear a beat that we both like and ask, ‘What’s this song about? It’s about how all lesbians have already dated each other. Okay, let’s do it,’” she says, continuing to chuckle.

Hanging out with Team Gina you can see the Yin and Yang in the ladies’ relationship. Gina Bling jokes and laughs often, while Gina Genius is more reflective and thoughtful, picking her words carefully as Bling spills her thoughts. It’s apparent that Bling brings the fun in the group while Genius brings the serious, and therefore bring out the opposite in each other. Seeing them interact, you’d think they’ve been a duo for a lot longer than they have. They only met two Februarys ago, and played their first show last July. But what they’ve done in the meantime has been nothing short of amazing: recording an EP, touring the country, and this summer, they’ll add playing the Capitol Hill Block Party to that list.

Meeting at a fellow female rap duo (Scream Club) show in Olympia, the two decided to start a rap group that night. As well, they also decided they would become Scream Club’s backup dancers, and spontaneously did so that night. After a stint as backup dancers onstage at Scream Club shows, SC member Cindy Wonderful asked the girls when they were cutting their first record. So they did.

Team Gina’s EP, Gina Gina Revolution, is full of catchy hip-hop beats with rhymes both funny and ironic, many times saying something about society, although they giggle when people read into their lyrics too much. In their song “Deez (Kids Are) Nutz” Bling and Genius rap about high-school age boys who act hard, as if from the streets, although they’re from affluent families living in the ‘burbs. “People say ‘I like how you called out the white privileged’, or, ‘That song reminds me of my brother and I always talk to him about that,’” Gina Bling says with a laugh. Although it seems as if they were trying to say something about young, rich boys who follow the lead of Eminem, they were really just writing lyrics they found comical. Starting with a skeleton of a song, Team Gina thought of what the beat was saying. Thinking it sounded hard, dirty, and gangsterish, they thought of gangsta wannabes. “What’s more gangsta wannabe than suburban white boys?” Bling says. TG brainstormed all the clichés associated with wannabes. “We laughed hysterically the entire time, then that song ended up really resonating with people.” Bling says, quickly following with an inquisitive, “Really? Great.”

Team Gina love everything campy, including nostalgia from the 80s. Bling sites the Delorean and the 80s tween animated series, Beverly Hills Teen. Genius and Bling then exclaim in unison, “Gem and the Holograms.” Specifically the dolls, which, they say, were comparable in size to the Michael Jackson doll. Gina Genius says of the Gem doll, “I was forbidden to have Barbies because, of course, Barbies were terrible representations of women. So I got a Gem [doll], and at first I was devastated because it wasn’t the real thing, but over time, I think it made me turn out the way that I did.”

How she turned out was as an activist. “The 80s made me an activist,” Genius says. “At seven years old I wrote letters to Gorbachev and Reagan saying, ‘You gotta make peace.’ I wrote a lot of letters.” “I used to do a lot with queer youth in NYC,” Genius continues. Gina Bling was involved as well, having gone to Vietnam after high school to plant trees in place of land mines. The two also, coincidentally, attended the same anti-war marches in DC, but had never met each other. Genius and Bling are still involved. “I’d say we’re an activist group in a lot of ways because of issues we try to bring to the forefront,” Genius says. “Being out queer musicians is activism in itself.”

In the future, Team Gina see their music taking on a more dancy sound than a hip-hop feel. “We wanted to do something that’s more poppier,” Genius says. The new album is two thirds written, and Team Gina is in the process of finding a bigger label to release it. As we finish bowling the tenth frame, I check the score. Team TIG has won, although Gina Bling alone almost scored as many points as Team TIG did together. But that’s not what Gina Genius is there for; she’s there to ground the operation, keeping Bling focused. If not for her presence, who knows how Bling would’ve bowled. And we may never know, but what we do know is that between the two of them we have some incredibly fun hip hop.