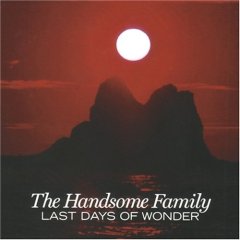 Last Days of Wonder, the latest album from The Handsome Family, a husband and wife duo based in Albuquerque, gives country music something that the genre isn’t particularly familiar with – interesting lyrics. Each song on the album unfolds like a classic American Gothic novel, full of voluminous layers and dark overtones. This could be attributed to the fact that Rennie Sparks, one half of the band and also a published author, is solely responsible for penning the lyrics.

Yet it's the haunting baritone of Brett Sparks that breathes life into these stories. While the music shuffles simply at a back porch country drawl, the words shoulder the brunt of the weight and move the songs along. The lyrics are reminiscent of those of Colin Meloy, except that the Sparks’ deliver them in at a much slower, pseudo-ballroom waltz pace. The lyrical genius of this record is best shown in the track "Tesla’s Hotel Room," a song that accurately and entertainingly tells the story of the inventor Nikola Tesla, in a sincere, deadpan manner that tucks the listener in like a bedtime story.

The songs on Last Day of Wonder have an air of old folk ballads – simple guitar patterns, picked banjos, and barebones basslines. "These Golden Jewels" sounds like an old Ledbetter recording with the addition of a theremin for a little extra late-night scary movie flavor. And in other places, the album is pure and simple country. Songs about love, loss, and cheap beer are covered in great depth, but always maintain the full literary sense of a Flannery O’Connor short story. While the album does get a little repetitive at times, it is very hard to lose interest. Each song brings with it a new emotion, told beautifully in well written verses and accompanied perfectly by the traditional sounds of Americana.