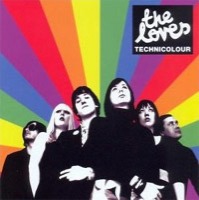 Welsh band the Loves have fallen prey to the confusion cooked up by many a band that has spent the better part of their lives immersing themselves in ‘60s music and culture. Throughout the band’s second album, Technicolour, the group jumps from a psychedelic haze to a Farfisa-heavy bubblegum sound all the way to a sunny folk-inspired rumble, never really settling on one sound or idea to call their own.

Like bands of their ilk, The Loves also rely to heavily on many of the ideas already laid down by the bands they are influenced by. “I My She Love You” is a wonderful and chirpy pop song, but rides the opening riff of “Louie, Louie’” (played here on a Farfisa) right into the ground. As well, “She’ll Break Your Heart” takes a grab bag of samples from ‘60s hits, most notably Wayne Fontana’s “Game of Love,” and concocts a new track out of them. I wouldn’t take umbrage with that if the song weren’t a straight ‘60s style pop song, but rather a crazy rock or electronica number.

What keeps the album together is the infectious melodies that the band has in abundance – hooks that will bury themselves deep in your unconscious that you will find yourself humming on the street without knowing where they came from. Tracks like “Summertime” and “How Does It Feel To Be Loved” will take a more immediate hold on your life, giving you an easy track to sing along with even during your first spin of this CD.

It’s an album that is quite easy to put on and shimmy around the house to, but it doesn’t feel like one that will stick in my CD player for days on end as I hoped it would. This is simply because the Loves are a slave to their influences, taking the bits and pieces from their well-worn singles and albums and roughly stitching them together with fat lengths of thread and yarn. If they can use those pieces to really come up with a pattern that stands out both as homage and on its own, they could very well be one of the finest Britpop outfits around.