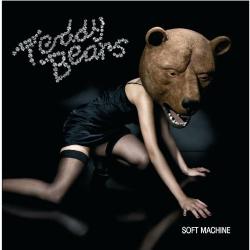 If I were to write the definitive history of rock and/or roll — a lofty and unreasonable goal to be sure — amongst my list of rock's villains would be the asshole who created the term "IDM" (which stands for Intelligent Dance Music). Wikipedia is unclear who the first person to use it but give it a birth date somewhere around 1991. Surely bringing an unnecessary level of pretension to a genre that did not need it is as sinful as anything Mike Love has ever done.

I have no clue whether the gentlemen from Swedish dance-pop band Teddybears would agree. I'd like to think so, as their latest album, Soft Machine, is committed to making a continuous dance party set to tape. This record may make you want listen to in your bedroom with the shades down and the doors locked (presumably, if you dance as poorly as I do).

That's not to say that the album is completely free of any indie pretension — its first proper track, called "Different Sound," instructs listeners to dance to something they supposedly haven't heard before: namely, the Teddybears. That sense of braggadocio works because a distinctive personality doesn't come through in Soft Machine. Unlike, say, the Scissor Sisters (who could have their own cartoon show where they battle crime and make great dance music — which would so fucking rock, by the way), Teddybears are solely defined by the sound on their records.

Combining many elements and artists from pop music throughout the world (reggae, hip hop, punk, etc…), the album succeeds mostly because of its inconsistency. Jamaican MCs Mad Cobra and Elephant Man contribute rhymes to two of the album's best songs ("Cobrastyle" — which was, I'm told, featured in a commercial for Tab Energy drinks — and "Are You Feeling It?"). Iggy Pop also appears to lend his voice and punk cred in the track "Punkrocker." The harmonies in "Automatic Lover" are filtered through a vocoder like Daft Punk or Seattle's United State of Electronica, and another track has Neneh Cherry and Annie providing the vocals. The record rounds out with a few more instrumental tracks, adding to the impression that there's no one dominant voice throughout the album.

One small note, I do appreciate the Teddybears using titles of songs like "Punkrocker" or "Cobrastyle." It's a minor "fuck you" (whether or not it was intended, and I tend to believe it wasn't) to any rock writer concerned with word counts.

Soft Bulletin and the Teddybears bring in a lot of guests and use some tricks, but the point isn't to name-drop each luminary. The record aims to get everyone to dance. It reminds me a lot of Jerry Lee Lewis (although they sound nothing alike). Lewis was known for doing nearly anything like lighting his piano on fire just to make sure every person is having a great time.

And really, isn't that the point?