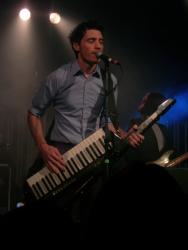 Mute Math, Shiny Toy Guns, and Jonezetta at the Showbox

It's impossible for any band to be too into their own music. I mean, no self-respecting concert-goer has ever said to him/herself, "You know, this music is great, but I really wish that these guys would just stand there on the stage with a blank expression." Oftentimes, the greatest concerts seem to be the ones in which the band gets more sweat on their collective brows than the audience does. Last Tuesday at the Showbox, I had the pleasure to witness living proof of this musical phenomenon, as three energetic bands kicked of their nationwide tour right here in the Emerald City.

The first to grace the stage were Jonezetta, an upbeat act sporting top-of-the-register vocals and danceworthy tunes galore. From the get-go, these guys made it clear that they journeyed all the way up from Mississippi for one reason and one reason only: to put on a hell of a show. If there was a single measure of music during which any member of the band was not banging his head, sweating bullets, or otherwise expressing his enthusiasm, then I must have been banging my own head right through it. Now, it's arguable that their set could have used a bit more diversity in the tempo and the overall structure of the overlaying melodies, but no "self-respecting concert-goer" really cares about that technical mumbo jumbo when they're dancing their brain out anyway.

Once Jonezetta had left the crowd with sufficiently increased heart rates, it was Shiny Toy Guns' turn to showcase their strange and beautiful breed of entrancing electronic goth-rock. The group of four — clad in makeup and hair dye — was highlighted by a pair of lead singers at mid-stage, one on behalf of each gender (Chad Petree, Carah Faye). Though they both gave great performances in their own respects, the crowd seemed particularly intrigued by the unique and enchanting voice of Faye, the female representative of the band. Each time she stepped within vocal range of her microphone, all eyes and ears seemed to be on her (even when her mic cord disconnected during the middle of a song). I was surprised — and a bit disappointed — to find that throughout the course of their set, Faye was quite often left with nothing more to do than to wander intently across the stage and do the best she could to involve herself in the music being made around her, while Petree (who also takes care of the guitar work) sang through long stretches of verses and choruses all by his lonesome. As Shiny Toy Guns progresses musically, I think it would be interesting to see Faye take a more prominent role in the vocal facet while Petree steps back slightly and puts that extra bit of focus into his guitar.

Last on the bill was the deserving headliner, Mute Math. To say that these guys are great live would be an insult. They are absolutely incredible. Their innovative blend of intricate rhythms, dynamic melodies, and sing-along vocals (not to mention a keytar!) make for a very complex and enjoyable sound. Paul Meany is one of the most naturally gifted vocalists I've ever seen, right down to the slight turns of the head that kept him from overpowering his own microphone during each high, loud, precise note he projected. He exuded charisma, turning over a refrain to the audience from time to time, who enthusiastically belted out the lyrics with such volume that even Meany seemed slightly taken aback at times. Quite possibly the most memorable moment during the concert was when the entire band, led by drummer Darren King, broke down into a percussion-and-weird-noises song in which Meany and bassist Roy Mitchell-Cardenas banged upon drums and symbols placed around the stage while guitarist Greg Hill put down his guitar, picked up his entire board of effect pedals, and manipulated the sound of his guitar's feedback by tweaking knobs. At one point during the set, a fan cried out, "You guys are all geniuses!" and by the crowd's response, I'd say that they agreed.