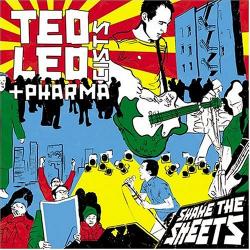 Admittedly, I am a new devotee of Ted Leo and his merry band of Pharmacists. On hearing the title track of his last LP Hearts of Oak earlier this summer, I found myself instantly smitten. Catchy and guitar-driven, "Hearts of Oak" is a near-perfect pop song. Imagine my delight when, on an impulse buy, I discovered a band that is bright in every sense of the word {including my favorite: intelligent and clever}.

On this, his fourth LP, Ted Leo once again showcases his signature brand of relentlessly astute pop. Festooned with bright bouncy guitars, crisp cymbals, and smart lyrics, Shake the Sheets is uptempo power pop with an intellectual edge. Leo is a raconteur for our times: each track weaves a lyrical plot filled with savvy details and sly nods to literate listeners.

Fittingly, given today's uneasy political climate, several tracks on Shake the Sheets foreground the anxieties many of us hold about the direction our nation has taken in recent years. Leo candidly tells listeners "I'm worried for my entire country…The state of the state don't make me feel so safe." But he marries these concerns with an abiding sense that something still can be done. Even though "we still see people waiting for the next excuse for war," Leo embraces punk's DIY ethic and gently encourages us to use our frustration as impetus for seeking new solutions. With its incisive observations and sun-bright sound, Shake the Sheets offers a soundtrack of hope, an essential for this election year autumn.

Read all about imaginary jessica's chat with Ted Leo!