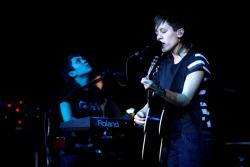 Before I get into gushing about how great Tegan and Sara were live, I need to first gush about the Triple Door. Previous to this show, I'd never been there, so I didn't know what to expect. It's fancy!

We "checked in" to the front desk lady who escorted us to our suite (after first giving us a small tour of where the bathroom is) with piped in music and a designated server. There were no opening bands and the show was over by 10. Although I wouldn't want to experience every show in such a swanky manner, it was an awesome break from the norm. It being a midweek show, it was nice to get home at a respectable hour.

The Triple Door is an amazingly intimate venue. Tegan and Sara went into a bit of a diatribe about how this tour they opted for playing smaller venues two nights in a row instead of playing one night at an arena. They even talked excitedly about their in-store at Easy Street Records and how they love in-stores because they can see everyone in the audience and look them in the eyes. It's comforting to know that as Tegan and Sara become more and more popular, they still respect their humble beginnings.

Having seen Tegan and Sara at least half a dozen times, I noticed they were exceptionally funny this show. Despite the fact it would be comprised of only 50% music and the rest stage banter, I really wish they would come out with a live album. Their onstage personas really do add a lot to their shows. Their sisterly jabs and dry humor comments kept the crowd laughing all night.

Tegan: Sara, you look really blue, are you feeling okay?

Sara: Um, yeah, it's probably the blue light that's shining directly on me.

{they start playing their next song}

The keyboard was way more prominent in this performance than previous times I had seen them and they shared keyboard duties. It seemed as if the sister that had written the song played guitar and sang while the other sister provided backup and keys (and sometimes another guitar). This made sense since the sisters relocated to different ends of the country and primarily do their songwriting isolated and then collaborate once the song is already written.

The first hour they focused on played songs from their forthcoming (July 24) new release The Con and then played highlights from So Jealous. While playing songs from The Con, Tegan and Sara gave tidbits of information about the album such as an explanation about the title track:

Tegan: The Con's title track was originally called "Encircle me" but Sara said it sounded too much like the name of a song a metal band would play so we changed it to "The Con."

I've said it before and I'll say it again: Tegan and Sara put on a great live show. They rely on old fashioned means of entertaining like laughter and connecting with their audience as opposed to stage theatrics and pyrotechnics and it's incredibly corny to say it, but they really seem to care about their fans and even though they're at the point of where people recognize them everywhere they go, they still get nervous on stage. In fact, Tegan said in the middle of the set, "The only way I can accurately describe how awkward I feel right now is to say I emotionally and physically feel as if I'm in a unitard."

Make sure to check out The Con at your local record store on the 24th and mark your calendars for their next Seattle performance on December 3!