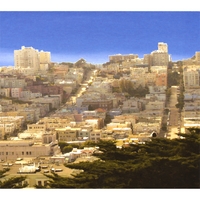 One of my favorite Boston releases of the year so far, The Vinyl Skyway's From Telegraph Hill blends alt-country and retro-riffic indie pop in such a way that the songs seem at once groundbreaking and familiar. Hooks and vocal harmonies are expertly placed and well-executed; lyrics are poetic; and sequencing is crafty and inspired. Take track two for example: Anyone who's made a mix tape knows the importance of track two. It's the big BLAMMO of a song that knocks the listener off their feet after track one has eased them in. (See High Fidelity for further explanation.) The Vinyl Skyway placed the whopper "Don't You Like It?" (called "Pop Song" on their MySpace player, FYI) in the second position and sure enough it hits the mark. Every time I listen to the 1-2 punch of the gorgeous opener "Hangin' On" and the organ-driven, upbeat "Don't You Like It?" I get excited about this album all over again. Even if the song quality sank from there, it'd still deserve high marks.

Thing is, it doesn't sink at all. The album has more heart than an artichoke, and it delicately balances between upbeat pop and solemn ballads, with sharp and introspective lyrics and lush harmonies. It's an album whose appeal is wide; I could just as easily imagine my parents embracing it as college radio fans.

One of the things that makes these soaring songs so appealing is that they don't follow a formula. Many times a bridge appears where you wouldn't expect one; or a song forgoes a chorus altogether; or a song concludes when you thought there'd be another verse. Spread throughout the album are three short instrumentals ("Interlude," "Salut," "Soliliquy"), which add a tasty dash of spice to the transitions. A cover of the Stone Roses' "Bye Bye Badman" appears towards the end, as does a reprise of "Deadly" called " D.I.A. Reprise" (for the lyric "Dying in America").

And then there's everything in between, which spans from the delightfully hook-y "Where?" to piano ballad "Mary Anne" to CSNY-like "Shuttlecocks." Some of the songs have a definite '60s flavor ("Lovely Day"), while others may call to mind The Jayhawks and other alt-country all-stars ("Kitchen"). Aforementioned "Deadly," a song for which the band recently shot a video (sans keyboardist Dave Lieb, who was on the wrong coast at shoot time), is a pretty pop song with an underlying sadness ("Sometimes it gets so lonely," sings Hayes).

Hayes' lyrics mimic the emotion that's omnipresent in his voice: "When you're gone / I'll smell the sheets and weep forever long / It's a fever I would fight for 'til your death / Catch my breath / Please don't go," he sings in a delicate falsetto on "Everlong." He comes across as the ultimate sensitive artist and you just want to give him a hug after listening to the album's swooping ballads.

This album soars past average, thanks to extremely robust songs. The Vinyl Skyway, which grew out of alt-country act Lemonpeeler, takes the basic ingredients from The Beatles' cookbook, stirs them up, adds in lots of "oohs" and "ahhs" and some "ba ba bas," sweetens it with lap steel and Wurlitzer and bakes it up into a dish that's complex and full flavored. Cooking metaphors aside, this is just a hell of a record.