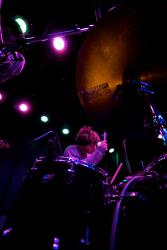 Telekinesis at The Crocodile

Calling the night a triumph for Michael Benjamin Lerner is a gross understatement. Perched on his drum throne, looking out over the sea of fans who piled into the newly-christened Crocodile, he obviously felt on top of the world.

See, Lerner's one-man band, Telekinesis, just released their full-length debut on Merge Records. His producer, Death Cab For Cutie's Chris Walla, gave the man some serious buzz on Stereogum last year, before the album was even recorded. He's been on the road with a live band that completely matches is frantic, razor-edged drumming. It's as if the stars are in perfect alignment for Lerner, which explains his near-constant smile during the show.

Lerner started off the set on acoustic guitar, strumming a few chords before taking his place at the drum kit. Sure, the guy can play guitar, but he was made to drum. His body practically launches into the drum riff for "Tokyo." I was right up front, witness to the act, and I still can't work out how he was savaging his drum set and managed to sing. He smashed a cymbal so hard it fell off. In another life, Lerner could have been the next John Bonham. He'll have to settle for Indie-Pop drumming greatness.

On record, Telekinesis songs are pop gems filled with catchy hooks that latch into your ears and don't let go. Live, songs like "All Of A Sudden" rock out much more, thanks to the heavier riffs guitarists Chris Staples and David Broecker bring to the mix. When the band launched into "Foreign Room" at breakneck speed, the crowd moved. Seattle crowds hate to move, but I don't think they could help themselves. I couldn't.

And through it all, Michael Benjamin Lerner looks humble. I've gotta imagine he knows he's the new hotness, garnering mainstream love and the support of local greatness like John Roderick (who stood beside me the entire show and must have known I was too intimidated to strike up a conversation) and Chris Walla. He's not going nuts with rock stardom, collecting groupies or partying all night, as is now is right. Nope, he's just rocking out behind the kit – smiling the whole time.