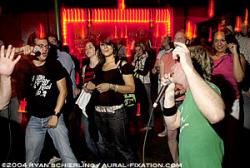 Marlo's mission statement is simple: "We just want to rock out and make people dance… with their shirts off." And the Lake Stevens dance-rock duo of Danny VanHollebeke and Timmy Hudson — feeling the same groove as United State of Electronica and The Fitness's my- oh- so- sweaty- clothes- are- sticking- to-  my- hot- hot- body- so- I'll- take- them- off dance fever — would certainly irritate the piss out of the good townspeople of Elmore City, Oklahoma.

But here in Seattle, where it sometimes seems we may as well have the same old-school puritan legislation that keeps ass-moving illegal in the clubs of New York, people are beginning to realize that shaking what they've got is damn fun.

Tuesday night's Chop Suey crowd made up for in enthusiasm what it lacked in size, with opening band apathy discreetly leading to toe-tapping, then swaying, and finally, some randy bouncing about. How can you not love a band that brings their own smoke machine and rides in from stage-left on a six-foot wooden rocket? Driven by laptop beats and basslines, Hudson and VanHollebeke's jangly guitars and sometimes breathy, sometimes pushy vocals alternately punched the crowd's pop buttons. A mid-set cover of A-Ha's "Take On Me" put Chop Suey squarely in Marlo's palm and, as men of the people (and maybe in search of some digits), they ended their performance on the dance floor, wringing out a perspiration-soaked remix with the crowd they'd whipped to a froth. And then, mission accomplished, they were back on the wooden rocket and out of there.

Mister Pleasant, a thoroughly relaxing and, like their namesake, pleasant Seattle three-piece was like a good massage after the Marlo workout. Normally a "costumed, one-man vibrating sound machine," Josh Ottum, of the electric pop duo Friends for Heroes, enlisted Friend Brendan Bosworth and USE's Jason Holstrom to flesh out live performances. Like Friends, Mister Pleasant employs a backing track that plumps the trio's already lush live sound like a hot Ballpark frank but, at the same time, can be initially disconcerting because you're not quite sure where that subtly-buried tambourine shake or additional beat is coming from.

At first glance, the band look like the nice boys next door that would wear sensible shoes and never break guitar strings, but just as soon as you leave mid-set to get another can of Rainier, Ottum's quiet, chastising "I'm already over you, got something coming to fill your shoes…" leaves a guilty stain on your conscience for any past and all present indiscretions. But it's only temporary – and when the red velvet smoking jacket-clad Ottum grins from underneath a wide-brimmed hat, everything's cool again.

While the IGs are no strangers to Tennis Pro, and vice versa (they've penned a theme song called "Imaginary," for their favorite "phantom hotties"), I'd never seen David Drury, Sean Lowry and Phil Peterson fully decked out in their Wimbledon whites.

My experience with tennis comes solely from a pair of high school crushes – one on tennis team cutie Sharon Heese and the other, an infatuation with former pro tennis teen-idol Jennifer Capriati, well before she pierced her nose and started flirting with "the pot" during that bad-girl phase.

As expected, Tennis Pro did not disappoint – they played a dozen pure-pop songs that all lodged themselves in my head like Wonder bread and double peanut-butter sandwiches cemented in your craw when there's nary a drop of milk to be found.

The band must also be commended for banging out a couple of new soon-to-be local favorites not on Happy Is The New Sad, most notably a song taking the theme of the Fountains of Wayne TRL chart-burner "Stacy's Mom" to the places we all knew it should have gone in the first place (if you know what I'm sayin').

And, they honor requests as well. Someone in the crowd shouted "I want to see the coconuts," and Peterson – ever the showman – wasted no time in stuffing a tennis ball into each back pocket. He then shimmyed his ass back to the bass amp, much to the delight of the ladies, and possibly a few men, in the crowd.