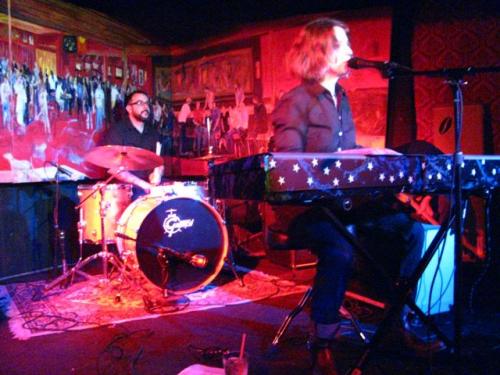 Early shows are always fraught with a wee tension: Will fans turn out early to hear the bands, while many people are just finishing up their happy hours and lining up the soirees and situations for later in the evening?

The music of Terri Tarantula in particular seems to call for deep dark past midnight status, but that’s because on craggy trouble in mind maps of alternate Seattle like “Mulligan” and pendant whispers like “Bag Of Bricks,” this is all precise biomapping. Vocalist and new-keyboard enthusiast Terri Moeller has taken everything brisk and bitter about her last band Transmissionary Six and freshened it with a creamier, less heavy sound.

Her new group Terri Tarantula played their first show and self-titled CD release last Friday night at the Sunset, and unlike a T6 show or two there, it was packed to the gills. This was partly due to several reasons: Trespassers William opened and they had happy, devoted people there too, and then members from TW stuck around and played with TT.

Graig Markel came in during Trespassers William’s sonorous, mesmerizing set, and then proceeded to help Terri kick off their half of the early evening with a vivid cover of “Baby’s On Fire.” Using Brian Eno as a creative touchstone for a band more about piano and drums than the guitar and bass driven T6 was a daring way to start things. Speaking of daring, it all ended on KEXP’s lovingly rotated single from the debut, “The Daredevil Way.”

That track and “Shaker Star” are the two perfect singles on the album, with witty lines about scrambling through life with broken hearts and reset bones in warm dirty Nevada rains.

(Photo by Chris Pugh, friend of Terri and the band.)