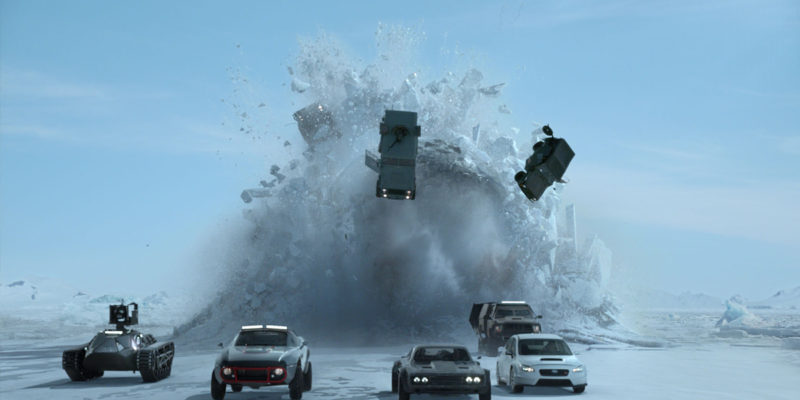 The Fate of the Furious: #SquadGoals for Life

{The Fate of the Furious opens in Seattle Friday, April 14 and is screening at Pacific Science Center IMAX – plus a bunch of other places – but you should DEFINITELY see it there because it’s worth it}

As a Fast and Furious enthusiast, I feel like the question with every continuing installment of the series has become, “How far can they take it this time?” Well, friends, the answer for The Fate of the Furious is: RIDICULOUSLY FAR.

We begin in Cuba, where Dom {Vin Diesel} & Letty {Michelle Rodriguez} are honeymoon’ing and starting shit with local race overlord Raldo (side note: in the world of F&F, you need to accept that there are racing competitions in every major city with an overlord + 100s of scantily-clad female groupies). Racing ensues; insane shit happens – but everything is awesome. It’s Cuba! It’s honeymoon time! Dom is … dare we say it? Happy.

BUT NOT FOR LONG.

Enter a mysterious blond who recruits Dom to “work for her,” based on some kind of something she shows him on a phone. This woman is a hacker known as Cipher (OF COURSE SHE IS); a hacker with unlimited funds and lots of shiny toys played by Charlize Theron who positively nails the dead-eyed-icy-sociopath vibe of a master criminal.

That “something” (no spoilers!) is compelling enough to make Dom leave Letty, abandon everything, and put him in direct conflict with his family. First up, hijack an EMP weapon and bring it to Cipher, which paves the way for Hobbs {Dwayne Johnson} & Deckard {Jason Statham} to street-fight their way through the most over-the-top prison break (I kept hoping for it to evolve into a dance battle, but alas. nope) ever.

Also, Mr. Nobody shows up with a young protégée (who has NO BUSINESS DRIVING BECAUSE HE DEFINITELY CANNOT BE A REPLACEMENT FOR BRIAN YOU JERKS) and reunites the whole gang including Roman & Tej, Hobbs, newcomer Ramsey, and even Deckard; all of whom think Dom is now a bad guy – except Letty – because their love is a special, beautiful kind of love. OMFGWTF Dom’s fam is against him! WHAT IS EVEN GOING TO HAPPEN?!?!

One thing that happens that I’m still laughing about is, “Oh, this is the warehouse where we keep all the cars we seized from drug dealers on the East Coast.”

Let’s talk about that action though: car chases galore, explosions for days, “making it rain,” (can’t describe; you gotta see this one to appreciate it), and trying to outrun a freaking nuclear submarine across frozen water. A SUBMARINE you guys. A. Submarine.

It’s big damn fun — and of course it leaves things wide open for number 9 (even if we didn’t get any kind of post-credit sequence, we know it’s coming). Go see it!