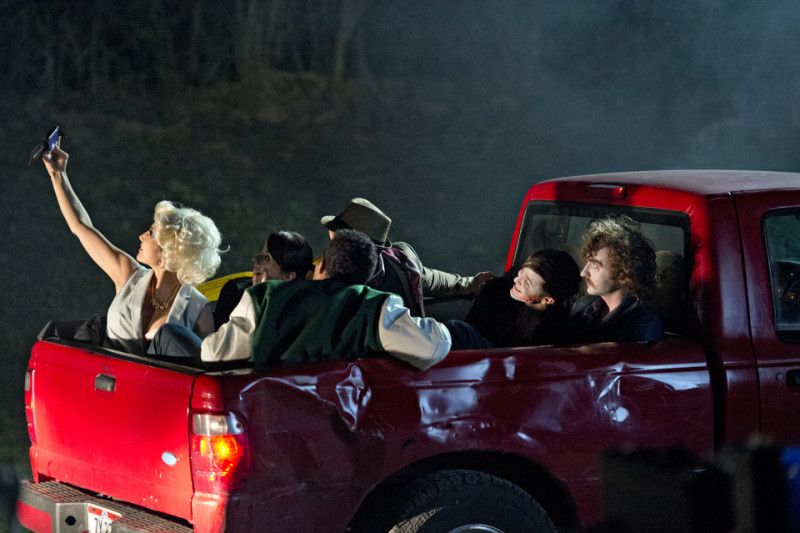 “It’s not like the Funhouse is creepily positioned in the middle of nowhere with only a broken-down asylum nearby, haunted by the ghosts of its dead, deranged inmates …what’s there to be afraid of? Come on!”

Except it’s totally like that. The Funhouse Massacre unleashes a posse of the most dangerous serial killers on the local haunted funhouse on Halloween night, supplying each of the murderers with an almost unlimited supply of victims—most of whom believe they’re just watching “part of the show.”

Director Andy Palmer says the film is an homage to the slashers of the 90’s, and he did a pretty boss job bringing that vision to life. With a range of maniacs that hit almost every serial killer trope and expert special F/X by Robert Kurtzman, it definitely feels like a throwback film—but there are also some great nods to today’s tech-obsessed culture.

Some of my favorite moments include watching the real serial killers critique their funhouse set-ups, one of the main characters declaring her costume is “sexy Hilary Clinton,” the spot-on obnoxious radio DJs, and groups of young ladies screaming “I’m totally Instagram’ing this!” and “Hashtag best funhouse ever! Hashtag our friend got kidnapped by killers!”

Oh! And I didn’t even mention the KILLER cameos. Beloved icon Robert Englund has an entertaining role; there’s a great appearance by Courtney Gains {Malachai!}, and some juicy parts for horror-film regular Clint Howard and “that guy” Jere Burns.

While I won’t say this film is super scary, I will say that it deftly combines humor with some frightening scenarios and that it provided surprises … yes, even to a horror-fanatic like me. The Funhouse Massacre is, well, a lot of FUN.

{The Funhouse Massacre opens in the Seattle-area on Friday, November 13 (!!!) and is screening at AMC Southcenter}