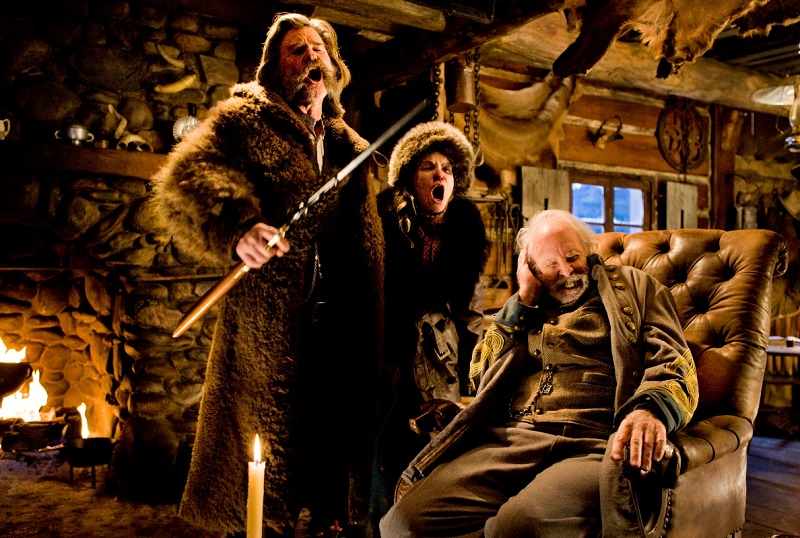 {The Hateful Eight opens in Seattle on Christmas Day, Friday 12/25, and is screening at AMC Pacific Place and Lincoln Square – yes, in 70mm!}

Nasty. Brutish. Unpleasant. Mean. Sadistic. Violent. The Hateful Eight is ALL of those things. Hello, friends; welcome to the genre of Exploitation. If you’ve seen Django Unchained and it didn’t prepare you for the sensationalism and violence in this chapter of Tarantino’s Western Tales; I’m not quite sure what to say to you—other than, “Really?!?”

Tarantino takes his love of film history to the next level here, shooting Eight on gorgeous, super-wide, 70mm film, and starting with an Overture that introduces us to Italian maestro Ennio Morricone’s score. At 3 hours and 7 minutes, the “Roadshow” version (which is the version playing at the theaters listed above) has a 12-minute intermission that cleanly breaks the first and second halves of the film.

Once the party arrives at the Haberdashery, they find that the owners are out and the cabin has been left in care of Bob (Demian Bechir), who also has a few guests: Joe Cage (Michael Madsen), a brooding and silent cowboy; Oswaldo Mobray (Tim Roth–chewing up his dialog like nobody’s business), the Hangman who’s on his way to Red Rock as well; and General Sandy Smithers (Bruce Dern), who fought in the same Civil War battles as Major Warren—(although, obviously on the opposite side).

Being a man that doesn’t trust, well, ANYONE, Ruth insists on disarming the three men inside the cabin, convinced that one or more them might be in cahoots with Daisy and is there to free her. Ruth strikes a deal with Major Warren, promising part of the money from Daisy’s bounty if he’ll help keep the peace until the storm passes and they can leave for Red Rock. But is Warren a trustworthy ally? What’s to stop him from killing Ruth and taking Daisy and her $10,000 bounty for himself? Are the people already in the cabin really who they say they are? And where the heck is Minnie, anyway?

Three plus hours’ worth of Tarantino-lilted dialog filled with incredible tension, buckets (and buckets and buckets) of splatter, and lots of laughter (how does Q.T. manage to make even the most violent circumstances verge on hilarious? No, seriously, how does he DO that?!?) later, you’ll find out the answers to all of that—and also be reminded of how you need to watch Reservoir Dogs again immediately because Eight gives you the same kind of intense, edge-of-your-seat feelings.

As a woman I’ll admit that watching Jennifer Jason Leigh get hit in the face repeatedly by men, knocked around like a ragdoll, covered in her own blood … and worse … was fucking HARD. I have a lot of mixed emotions about that, as I should. Even though Daisy Domergue is an admitted criminal, is nasty and unrepentant, and would probably rip out the throat of anyone in the cabin if she wasn’t in chains—that doesn’t mean she deserves the abuse heaped on her by John Ruth and the others. But, ultimately, this is a period piece—and a genre piece—and these guys are all Bad Dudes; that’s why they call them Bad Dudes The Hateful Eight.

Also, I kept asking myself: would I feel the same way about that character’s treatment if it were a man? I don’t think so; which is honestly pretty of sexist of me, isn’t it? Jennifer Jason Leigh says that it kind of is—she also says Tarantino is the most un-misogynistic person she’s ever met, and views Daisy as a very smart woman who won’t be broken, no matter what. IN-TER-RESTING.

All I know is, I enjoyed the hell out of this film, and I know I’ll be thinking about all of it for a long time; why it makes me uncomfortable, and also why I loved watching it. To me, this is part of the brilliance of what Tarantino does in addition to his wholehearted love of the craft itself: his films require multiple viewings, and depending on your own experience and world view, those multiple viewings will reveal multiple meanings to you as well.

Bonus: Here’s a fun The Hateful Eight drinking game! Take a shot every time someone says “Kick it open!”, “You have to nail it shut.” and “It takes TWO boards!”