On Sunday night, while we were all still basking in the glow of KEXP’s phenomenal Intergalactic Bowie Day, (which celebrated the Thin White Duke’s 69th birthday and the release of this 25th studio album Blackstar) David Bowie passed away.

Monday, January 11, 2016, as documented on every social media stream and media outlet, was a sad day for all of us. The outpouring of grief and stories of his amazingness joined all of us inspired by his brilliance and touched by his kindness.

Like many of our imaginary friends, we’ve never known a world without Bowie. We grew up hearing his songs, seeing his image all over MTV and on the big screen, and knowing and loving his art in all forms for decades. Because of that, we decided to gather up a list of some of our favorite Bowie things, and even with the knowledge it was only the top of the iceberg of his genius, it was a way too long list.

So, here are just six of the millions of reasons he is the best for all time.

“The Little Fat Man With The Pug-Nosed Face,” as performed on the BBC comedy, Extras.


We all know it’s impossible to pick a favorite Bowie song, but I’m going to park this video for “Rebel Rebel” here as a quintessential Bowie song that has most everything we love about him.

Of course we all heart the crap out of King Jareth in Labyrinth, but eternally in love, vampiric, ultra fashionable Bowie in The Hunger is just really divine {side note: he also hosted the second season of the television show!}:

Look, it just does NOT get any better than this: Bowie covering the sexiest Pixies song ever … spelling out D-A-V-I-D in place of P-I-X-I-E-S:

Also, remember this quote from Caitlin Moran’s 10 Things Every Girl Should Know. 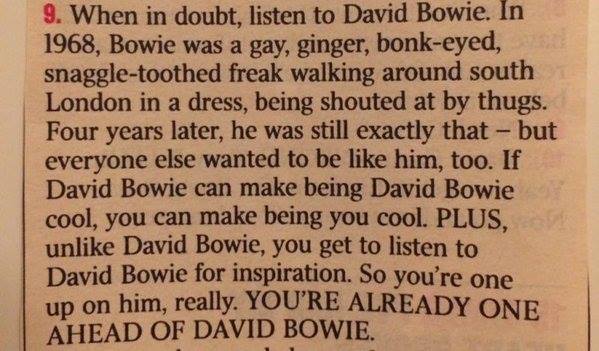 In case you hadn’t heard, there’s actually a Bowie Tribute show on Saturday, February 6 at the Tractor that’s been in the works for months: A Celebration of the Life and Music of David Bowie with BowieVision and special guests Purple Mane (Prince tribute band).

Speaking of great shows and Bowie stuff, we’ll leave you with a video of Seattle’s Exohxo performing “Young Americans” at the 2010 edition of Dancing on the Valentine. This year’s DOTV is scheduled for Saturday, February 13 at Neumos with Seattle bands covering songs from 1980’s John Hughes movies, and all proceeds going to The Leukemia & Lymphoma Society.