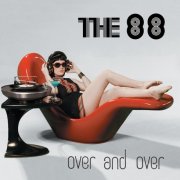 "You're the only one I wanna do," lead vocalist Keith Slettedahl leers on the paisley-peachy second track of The 88's Over and Over, cushioned by perfectly-played, crisply-produced, very familiar Age-of-Aquarius-by-way-of-Tin-Pan-Alley pop.

Sick of drama, others and his own, Slettedahl still has desires that need to be met. He later follows the above come-on with, "Meet me in the alley with the baby talk" ("All 'Cause Of You"). "You got another thing stuck in your throat," he snarls in the third song, adding, "Nobody cares what you've been through." ("Nobody Cares"). Is he talking about himself or someone else? It's never quite clear, but the could-be-on-Apple-Records "Withnail and I" mood of fashionably experimental existence persists through the next twelve tracks.

This is an often jaunty, challenging, intelligently created pop album. The 88 are a My Space phenomenon. My Space is sort of this generation's New Wave, right? But the appropriately titled Over and Over also dips back into 70's neo-progressive melodrama ("Bowls," with lyrics about jack-off posters and God. I think, no, I admit I'm a bit confused — perhaps they're attempting a Big Star-like statement on conflicted adolescent sexuality and professed faith, but don't test me on that), and a whole lot of Adam Merrin's relentless and — I hate to say — uninspired piano-pounding. Next time, I suggest naming the band after a classy element of the band, not the most grating one.

Near halfway through, "Battle Scar" seems to have enough Burroughs roach powder blown up its puckered asshole to be smeared all over VH-1, and is gone soon enough for its "la la la la la la la la" driven clone "Coming Home" to bounce up in the sequence, wherein perhaps Slettedahl is hoping his drug-addicted muse needs to be co-dependent with him again.(Who else is going to be around to provide a naked back for him to snort drugs off of, maybe?)

"I'm lazy — I'm tasty," Slettedahl sings in the radical shift in the album's tempo on the next track, an acoustic ballad where he reminds her, "You belong to me, and I belong to you." It's got a bit of soulful swagger. Mods like soul, right? The album cover of Over and Over is so mod, with kind of a Costello-ish look to the pictures in the booklet (of course these guys aren't charmingly thug-ugly like the Attractions; they look more like businessmen boyfriends of female hipsters). On "Haunt You," he sings, "I got a lot of something you ought to try — I'm going to haunt you for the rest of your life." Creepily effective.

In this way, The 88 remind me of an updated Urge Overkill: a tight, enjoyable band that lets us in on the joke about its own smug dissipation. But is the joke funny enough? Maybe if they find their cover on the order of "Girl, You'll Be A Woman Soon," we'll find out.

There is musical redemption, a hint of something stronger coming up. As the themes bounce between grey and dark, stronger material surfaces. For the slattern yet actually very listenable "Jesus Is Good," Slettedahl sleazes it up further with an image of, "sitting in the back smoking crack waiting for you." There's a nice Jane's Addiction fake blues meets Heart of a Saturday Night era Tom Waits looseness to this song though, showing hope for deeper work next time.