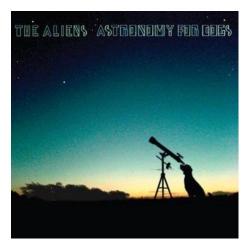 Astronomy for Dogs seems like a fitting name for the first album by the Aliens because pedigree has so much to do with disc. The Aliens are the remains of the now-defunct Beta Band – well, at least part of them – and the first post-Beta Band work put out by any of the members. With the sort of critical and popular success the Beta Band received, the Aliens have a lot of live up to considering their lineage. Unfortunately, although Astronomy for Dogs has its moments, it also has a lot of moments that aren’t that impressive, making you want to reach for your copy of The Three EPs rather than taking the Aliens out for a walk again.

I really tried to give the Aliens a break and not dwell on the Beta Band. They are an entirely new band with new directions, but hey, I’m sure Paul didn’t get off scott-free once he started putting out Wings records. However, Astronomy for Dogs just starts out of the wrong foot with “Setting Sun." The Aliens seem to fancy themselves as a 60’s rock band, pretty much copping the melody from “California Dream," speeding it up and adding trite lyrics. It comes across like Primal Scream whenever they think they’re the Rolling Stones: a bad tribute band. It's hard to wash the taste of “Setting Sun” and its unnecessary guitars flourishes out of your mouth.

It is interesting, though, to see the schism that is apparent on Astronomy for Dogs. On one hand, the Aliens seem to want to be a rock band. On the other, they want to be the Happy Mondays in their hey-day. After berating the listener with “Setting Sun,” the Aliens follow it up directly with “Robot Man,” a tried-and-true Manchester-influence electro-dance-rock-funk song that might have more of that Beta Band magic, but not much. Instead, you have to wait for “I am the Unknown” to get back to the rich melody and psychedelic harmonies that we loved in the Beta Band. (Sidenote: it is also a little much that two songs in a row have repeated use of the phrase “I am the ______.”) “I am the Unknown” is definitely more satisfying than the tributes that preceded it. “Rox” is a sibling to “Robot Man” but with a lot more substance to it, both borrowing heavily from the Mondays without just sounding derivative (it should be note, though, that on “Rox,” the Aliens, for some reason, break into the chorus of “Robot Man,” not only betraying the similarity between the songs, but begging the question why we need both of them to exist).

Where you might be starting to hear the sound that the Aliens should follow might be on “Tomorrow,” a track that has a bit of a Beatles-meet-the-Byrds feel to it without sounding like the Beta Band (mostly). It is infectious and melodic – and what I hope is a sign for the future of the Aliens. “Only Waiting” has touches of this charm, but dabbles a little too much in the mimicking their influences rather than playing off them. “Glover” also takes this “modern 60’s” route and with a little more success, staying a little more playful but it just goes on for far too long, clocking in at healthy 8:23. Unfortunately, most of the album is not populated by such songs. Instead, we get “Happy Song” with sounds like it might have been recorded as an afterthought and thrown on the album anyway.

The Aliens might be suffering from the success of their progenitor. People expect a lot from any band borne out of the Beta Band, and sadly, Astronomy for Dogs just doesn’t deliver. Instead, it feels sort of thrown together, a pastiche of styles and influences that obviously folks wanted in the Beta Band but never had a chance to do. Instead, Astronomy for Dogs, although does have fleeting moments of clarity, comes across as a muddled mess that doesn’t ever catch the listener for long enough to make an impression.