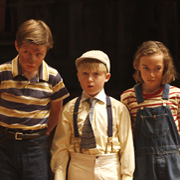 Theater Review: To Kill a Mockingbird

Two recent Truman Capote biopics presented fascinating takes on Capote's longsuffering friend Harper Lee. The always-good Catherine Keener (Capote) was all quiet strength and individualistic spirit; the surprisingly-good Sandra Bullock (Infamous) revealed an artist exasperated by the expectations of others. Lee is, of course, the author of 1960's To Kill a Mockingbird, the quintessentially Southern American novel upon which her literary reputation rests — she never wrote another.

Those recent movies, plus the enduring popularity of the classic 1962 Robert Mulligan film adaptation of Mockingbird, plus the fact that many of us were required (and rightly so) to read the novel in high school, might be contributing to the substantial local interest in this new Intiman production adapted by Christopher Sergel and directed by Fracaswell Hyman. The play added additional performances before it even opened, and has now been extended a second time (to November 10). I can't recommend it wholeheartedly, and even if I could you might not be able to get tix.

You probably remember most of the basic plot, but here's a lil' refresher. Scout Finch and her brother Jem (sans Holograms) live with their widowed lawyer daddy Atticus and their sassy maid Calpurnia in Depression-era Maycomb, Alabama. Jem and Scout befriend an inquisitive boy named Dill, who becomes fascinated with the spooky house where the mysterious Boo Radley has been holed up for years. Atticus gets the eccentric neighbors' tongues wagging when he agrees to defend Tom Robinson, a black man falsely accused of raping a white-trash woman named Mayella. Even after the guilty verdict, Mayella's crazy-drunk daddy Bob harrasses Atticus and eventually attacks Jem and Scout (dressed as a ham for the school play); Boo finally comes out of hiding to protect the chilluns that fateful night, and becomes a human being to them at last.

First, the positives. The set design by Alec Hammond is immediately striking — a tilted phone pole in the foreground of three rickety houses (the Radley residence notably cockeyed), and a knotty old tree trunk extending into gnarly blood-red branches which seem to be emanating a series of equally red chairs suspended above the actors and the audience. It's horrific, and quite brilliant.

The novel was told from Scout's POV; here the narration goes to sympathetic neighbor Miss Maudie (amiably genuine Patti Cohenour). The kids portraying Scout (Keaton Whittaker), Jem (Nick Robinson) and Dill (Lino Marioni) are fantastic, and the fact that some of their dialogue is difficult to hear isn't their fault. Local favorites Josephine Howell and Lori Larsen shine in small roles as Calpurnia and town gossip Miss Crawford, respectively. I wasn't crazy about David Bishins, though: his Atticus is a bit too subtle, and falls just short of carrying the heft demanded by the role. (But there'll never be another Gregory Peck, right?)

Some of Lee's subplots and characters had to be trimmed for dramatic purposes, of course, but there are some glaring deficiencies here. We're robbed of two of the novel's (and the film's) anchoring emotional moments: the balcony attendees standing as Atticus leaves the courtroom, and Scout recognizing and greeting Boo near the end. Here they're buried within other action on stage and not given their dramatic due.

A few innovations work remarkably well, though. The aforementioned set is great for the kid-centric action, allowing for all the movement and surprise the story requires. And toward the end of act 1, house lights are raised slightly and the audience becomes Tom Robinson's jury; act 2 commences after a 15-minute "recess".

And considering the wildly mixed audience reaction I observed after the performance, the jury is still out on whether this Mockingbird adaptation is worthy of Harper Lee. (Personally, I'd have to vote no.)