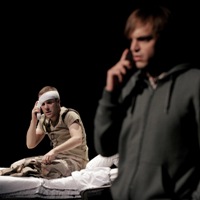 Theater Review: Prayer For My Enemy

Prayer for My Enemy is the latest Intiman world-premiere production by playwright Craig Lucas and director Bartlett Sher, a duo whose prior efforts have yielded mixed results: they received a slew of accolades — though not from me — for the sham that was The Light in the Piazza, did better with Singing Forest and The Dying Gaul, and did fantastic work on this season's surprisingly upbeat adaptation of Uncle Vanya. This new piece is a solid effort, if not quite on par with the creative team's best.

In an intermission-free 90 minutes, two childhood friends reunite as adults, become entangled all over again (though not quite like back in high school), and start making poor life choices that scream imminent disaster. Tad Voelkl (James McMenamin), having survived a failed marriage, substance abuse, and weird tantric-retreat adventures, is now an affable slacker. Billy Noone (Daniel Zaitchik) is about to be deployed to Iraq, having joined the Army Reserves to get his insufferable Vietnam-vet dad (John Procaccino) to stop implying that he's the homo he is. (Because I guess joining the military is preferable to coming out of the damn closet, or to just staying away from the crazy parent who calls you "Fagboy," "Liberace," and "Helen." Please.)

If you can get on board with all that, you'll be ok when Tad moves into the Billy-free Noone household, having begun a romance with Billy's single-mom sister (Chesley Rives). Of course, the family's dysfunction only grows: Momma Noone (Cynthia Lauren Tewes, of The Love Boat and the Broadway QFC) gets increasingly frazzled, a wounded Billy suffers a brief post-trauma breakdown overseas, and — big surprise — Tad is never happy because he's with the wrong sibling. (Do people really torture themselves like this?)

Meanwhile, a seemingly unrelated woman named Dolores (Kimberly King, alone worth the time and ticket) takes care of her ailing mother and provides keen, crankily hilarious, Anne Tyler-ish monologues about the messed-up state of things. In a play full of solid performances, King's scenes are the undeniable high points, and they're a big help throughout the saggy middle. Dolores' story collides with the Noones' in the final third and contributes to an almost-satisfying, just-enigmatic-enough conclusion.

Like another, much better, much more exciting current Seattle production (Mel Brooks' Young Frankenstein at the Paramount), Prayer for My Enemy will likely undergo changes before heading to the East Coast later this year. (There's even a character listed in the program who doesn't appear onstage, which kinda says work-in-progress.) Let's hope Lucas and Sher can find a way to make their audience a bit more sympathetic to the self-imposed plights of Tad and Billy and the gang.