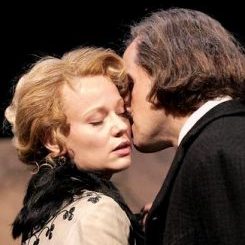 Just when you think the Rep and WET have all of the awesome scenic design talent this town can handle, along comes (of all things) a new adaptation of Anton Chekhov's classic 1897 play Uncle Vanya — and with it the coolest theatrical visuals I've seen in quite some time — to challenge them. The Intiman's modified-thrust stage has been decked with enormous revolving wall frames that produce imaginary halls and corridors leading to see-through rooms which hold warm, intimate, cinematic sets by John McDermott. And with Brian MacDevitt's intimate candleflame-accented lighting, and Deb Trout's lovely period costumes… well, wow.

But lest I get ahead of myself, and lest you think the superficials are all there is to love here, please know that this is an all-round fantastic production. Newly adapted by Craig Lucas and directed by Bartlett Sher (it's their second Intiman take on Chekhov after the much-lauded Three Sisters in 2005), this is the lightest, funniest, and ultimately most heartbreaking Chekhov stage piece you're ever likely to see. And see it you should — you have 'til mid-July.

Set on a country estate outside of Moscow at the turn of the 20th century, the story is essentially that of 27-year-old Elena (Samantha Mathis), who is trophy-married to an old blowhard, hypochondriac, formerly-great professor (Allen Fitzpatrick); they're slumming in their secondary property in the boonies to save some coin. Title character Vanya (Mark Nelson), pushing 50 and harboring some serious hots for Elena, is the prof's former brother-in-law and has been living there for as long as he can remember; the professor's longsuffering daughter Sonya (Kristin Flanders), who's got her own unrequited thing for the young-ish local doctor Astrov (Tim Hopper), is also a permanent resident, along with a few others sharing the toils of keeping the place running.

Vanya (or Uncle Vanya to Sonya, his late sister's daughter) has spent a good chunk of his life dutifully managing the estate, counting pennies for meticulous ledgerbooks, and sending the professor money to live on. As you can maybe imagine, it's been a long time coming when Vanya finally gets sick of it all and changes his tune about the prof, who he calls a "retired nobody," an "obscurantist" and "bloodsucker" whose successes have come at the expense of others' happiness. He and other characters proceed to snap out of their complacent suffering, rebel against their own thwarted desires, and act on their passions in ways that are alternately heartbreaking and hilarious.

That's right — hilarious. It's the first time I've seen funny Chekhov, let alone funny Vanya, but the gifted team behind this mounting manages to get laughs out of the despair- and frustration-heavy source material. Vanya's extreme bitterness is played for dark laughs, and somehow it works, frequently to delightful effect. (It's almost — but just almost — enough to prompt me to forgive Lucas and Sher for The Sham in the Piazza.)

Mathis, probably best known for roles in films like The Thing Called Love and Pump Up the Volume, is good here as the lazy, beautiful trophy frau who's never been required to do much with her life. In playing Vanya, Nelson seems to be channeling Wallace Shawn (who played the same character in Louis Malle's final film Vanya on 42nd Street, long overdue for a proper DVD release), but is very amusing as he approaches a big-time downward spiral. One of my favorite local actors, Lori Larsen (Noises Off, Little Women, The Constant Wife), plays Vanya's staunch momma very well, despite the role's limited stage time. And Fitzpatrick is brilliant as the selfish, washed-up coot.

But, aside from those aforementioned sets, the real star here is Kristin Flanders in the pivotal role of Sonya. The character's loyalties have been tested for years, she considers herself too "plain" to go after the man she loves, and she feels helplessly stuck in a grueling, cold existence; Flanders conveys Sonya's every nuance with magnificent panache. She's a wonder from the opening exposition to the tipsy chick-flickish exchange with Elena to the shattering final scene, a stunning sequence which concludes that the only thing worth looking forward to in life is death.

Aah, now that's the Chekhov we know and love.