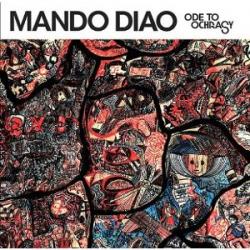 Ode To The Ochrasy

The third album from Swedish Mando Diao has all the ambition and energy of a sophomore release. From the first track, “Welcome Home, Luc Robitaille” it's clear that Mando Diao’s songwriting has improved with years of touring and success in the European and Asian markets. The hooks pack bigger punches and the music amply supports the mood and tone of lyrics.

A first listen reveals that Mando Diao wear their influences on their sleeve. Harkening back to Brit Pop, the majority of songs sound like the love child of Pulp, Supergrass, and Kula Shaker. With the occasional inspiration of Dylan on “The Wildfire” and John Lennon on the brilliant track “New Boy,” the album delights in making bold nods to music majors. The familiar territory is definitely a comfort for those audio-philes who miss the innocence of mid 90s pop rock. Hard driving bass, accompanied by quick flicking drums, are the perfect match to smooth vocals that are both clean and strong, without being overstated.

“Good Morning, Herr Horst” is by far the most unique tribute on the album, a delicious Nick Cave-sque/Gogol Bordello ditty. Like other tracks, the lyrics show Mando Diao’s obsession with bums and buskers. From a band hailing from “the dirtiest town in the cleanest country,” there is an element of wide-eyed cheekiness about dark subjects like drug abuse and hustling.

It may be this combination of sweet and salty that ultimately makes Ode To The Ochrasy one of the best albums not to breach the bubble of the American market. In an era of experimentation, Mando Diao’s more traditional approach may turn off audiences looking for the next trend. However, their ability to successfully reinvent a bygone era of music may also be their greatest strength.