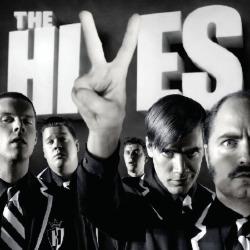 The Black and White Album

The Hives, to me, represent the rock and roll equivalent of Isaiah Berlin’s The Fox and the Hedgehog theory. As Berlin put it, “the fox knows many things but the hedgehog knows one big thing.” The Hives knows how to do one thing really, really well: rock the hell out to catchy pop rock songs.

As much as they try to diversify their sound and bring in pop hit-makers like Pharrell Williams to produce songs with on their latest album, The Black and White Album, they are still a band with a consistent sound that they either cannot or do not want to escape. On TBAWA there are plenty of Hives trademarks – big epic, 3-chord anthems that rock out from beginning to end like the MC5 or the Stooges and they seem to model themselves after KISS (with, hopefully, less assholery). Their songs are written to be catchy bubblegum songs with power chords, they refer to themselves on stage as “the greatest band in the world” or “your new favorite band” and each band member has a distinct, cartoonish stage name (Dr. Matt Destruction, Nicholaus Arson, Vigilante Carlstroem, Chris Dangerous and “Howlin’” Pelle Almqvist). The Arctic Monkeys probably sell more records, but how many of their members can you name?

Recently, Almqvist told Spin that he was afraid that TBAWA could be the last rock record that major labels were willing to pour a lot of money in to and it could be the last chance the band has at the superstardom their hype and boasts promise. A&M did spend a lot of money on bringing in pros like Pharrell Williams and the results, overall, are a mixed bag. It is definitely the most diverse Hives record to date but it feels like it is also the most uncomfortable for the band at a few different moments.

The two tracks Williams produced, “Well All Right!” and “T.H.E.H.I.V.E.S.,” add a sense of funk. “Well All Right!” brings to mind Little Richard and Jerry Lee Lewis. It uses piano, handclaps, and lots of “woo hoos” and works well because the Hives effortlessly recall the antics of Little Richard and Lewis (and even James Brown a little). “T.H.E.H.I.V.E.S.” doesn’t work nearly as well. It’s a funkier, Prince-like jam and feels forced. The guitar parts are turned way down, the bass drawn out more and Almqvist is taken out of his element altogether. Here he’s singing over some R&B instrumentation, not screaming over loud guitar parts. It is here where you notice just how limited the band’s range is. When I listen to this song, I picture each member of the Hives in the recording studio, dressed in matching black and white suits, collectively asking Williams if he was serious.

Sequentially, the next song up is “Return the Favour” and it is a return to form for the Hives – an all out rock and roll song. Fortunately, that song and is exactly what you expect from the Hives and they feel much more at home.

Actually, most of the record is an obvious Hives record. The first song is the lead single, “Tick Tick Boom” and it is as good as any of the band’s other singles from previous albums. It’s loud and rockin’ and clocks out after a very fast three minutes. It’s boastful and fun, all of the traits that made us Hives fans in the first place. The bridge slows down the tempo for a moment so the band and the listener can catch a breath, but Almqvist keeps shouting throughout. From the beginning, another break from the rock doesn’t come until the sixth track, “A Stroll Through Hive Manor Corridors”. It’s a circus-like instrumental with only an organ and drum track. Taken as a respite from the consistent, driving guitars, hard-hitting drums and Almqvist’s wailing, its inclusion makes sense and is appreciated.

Earlier I mentioned that the Hives reminded me of KISS and maybe the Ramones is a more apt (and fair) comparison. The Hives are at their best when they are rocking out, plain and simple. Their songs may sound similar but that is not a major concern with me because the Hives are one of the most energetic and entertaining bands (especially on stage) when they are at ease with the material. They are a rock band, period. And a very good one at that.

To quote the rock frontman Almqvist most resembles, “I know it’s only rock and roll, but I like it.”