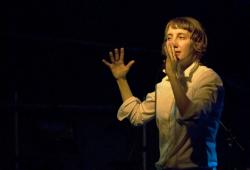 When Khaela Maricich walked out on the nearly empty stage of the Triple Door last Saturday night, she sang an a cappella version of her song “The Big U.” Then she explained that there was a beat programmed to that song by her friend (and onetime member of The Blow) Jona Bechtolt and then sang the same song over the dance-y beat. It was the first of many great moments over this unconventional but riveting performance.

Maricich is The Blow but she used a lot of plural pronouns throughout the night as though it was more than a solo outfit, either to include Bechtolt and others who crafted beats for her or to take on the personality of collaboration.

On the stage with Maricich were just a microphone and four bottles of Athena water. She had the synth-heavy recorded beats programmed off-stage. Between songs she repeatedly discussed the state of the hit single from the perspective of a fan and a musician striving for the “hot pop song.” She said she has spent many nights doing “scientific research” by hanging out in karaoke bars and recording down what each person sang and concluded that straight-forward “I love you” songs are not likely to work. Songs about unrequited love or longing, on the other hand, were golden. Instructing us that songs about precious things like “the universe or grandma” were nonstarters, we were advised that, if we also wanted to write hit pop singles, to start with a piece of trash and build on that. For greater effect she smashed one of the Athena bottles in her hands.

For a bit I tried thinking of examples to refute that theory, but when it came down to it, my favorite hit songs over the past few years (“Toxic” and “Since U Been Gone”) as well as two of the biggest (but most grating) radio hits of 2007 (“Beautiful Girls” and “Hey There Delilah”) also fit into that mold. "I love you" songs don't always make the biggest hits and they can just be weird, she insisted. I’m sure there are exceptions that prove the rule but I stopped contemplating that when I realized my time was much better spent just enjoying The Blow. Which I did. A lot.

Maricich was dressed from head to toe in white and danced awkwardly but carefree to mostly songs from the 2006 Blow album Paper Television {review}, the only proper LP with both Maricich and Bechtolt as members of The Blow. She had flubbed a few lyrics (especially during the final song, “Jet Ski Accidents”) and my friend Natalie wrote on my notepad that I “have to mention her meddlesome bra straps that kept slipping down her arms after vigorous dancing,” but those things were minor and only added to the charm of the show.

Her songs are catchy little numbers that lend themselves well to the lo-fi beats and her shows combine an awkward bedroom dance party with a performance art piece. Her voice is somewhere in-between the delicateness of Mirah and the less-than-subtlety of Regina Spektor’s, but of course she is more overt in her love of hooks and hits. She didn’t get anyone to dance along (this was at the Triple Door so everyone was seated) but the crowd sang along to songs like “Hey Boy” and “Fists Up.” For over an hour, she held our rapt attention with her presence, while only appearing to not being entirely comfortable on stage.

It was a very sublime evening watching a captivating performer sing fun, catchy songs in the best concert venue in town. The Blow was engaging and witty and talked about something I’ve spent quite a bit of time thinking about.