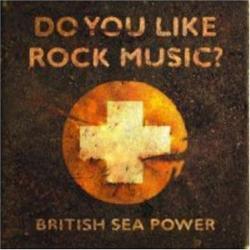 British Sea Power has done an excellent job of very stealthily becoming one of the most interesting bands on the British music scene. I know I sort of just thought of them as an afterthought – one of the many early '00s bands that flourished in the rock revival. You know the types: Feeder, Muse, South, the Libertines, Coldplay, Razorlight, Super Furry Animals, the list could go on and on. Yet, somehow, British Sea Power has been able to keep us listeners interested, and unlike their music brethren, people still get excited to hear them. Do You Like Rock Music? is an album that is all over the place stylistically, but that is a major part of its appeal.

I suppose British Sea Power was always sort of considered to reside in the more cerebral end of Brit Rock, you might possibly consider them the UK equivalent to Canada's Arcade Fire. Sure, the band are showmen, performing in matching uniforms and various stuffed objects on stage with them, but they backed this up with music that as dense and textured as it is catchy. I suppose if you had to pin me down to proclaim the standard-bearer on Do You LIke Rock Music?, it would be "No Lucifer," a song that captures both the post-glam fascination of the band with its root pop sensibilities. The song, on one hand has a bit of that Muse or Blur anthemic feel, but on the other hand is complex with its echoing guitars and drums stitching a cross-hatched rhythm while Hamilton delivers a surprisingly ethereal vocal. You could even argue that they take it up another notch on "Waving Flags," a downright Arcade Fire-like song, delving deep into the Bowie back-catalog. If you're the type to become enraptured with thick drums and swirling melodies, you'll fall for this one hard.

Much of the rest of Do You Like Rock Music? falls around these tent poles. "Down on the Ground" and "Trip Out" are straight up rock and roll, rolling and unstoppable, while the instrumental "Great Skua" shares more with Galaxie 500 or My Bloody Valentine with the low and growling bass and drums that slowly combine as the song builds. "Atom" was previously heard on British Sea Power's Krankenhaus EP in slightly different form. Here we find the band letting the song start off as gentle ballad before letting the doors swing wide open into an all-out rock song. I'm not sure if I like the additional overture to the song, but at least they didn't mess with the throwdown that is the core of the track. However, it is the sidetrips like "Open the Door" that really surprise the listener. Not only does this little pop gem showcase an entirely different side to the band, but you wonder what else they have hiding in there. Sure, it might not be the best song on the album – far from it – but it sure keeps you guessing what British Sea Power might throw at you next.

Do You Like Rock Music? gives you exactly what you might expect from British Sea Power: a lot of rock, some surprising turns of events, and the desire to hear more from the band. The album on the whole is wildly uneven, like a band that just has too many ideas that it doesn't know what to do with them. However, unlike a lot of the bands spawned from the turn of the century, British Sea Power does not seem like a one-trick pony, which is what most music fans want to find in a band in the first place.