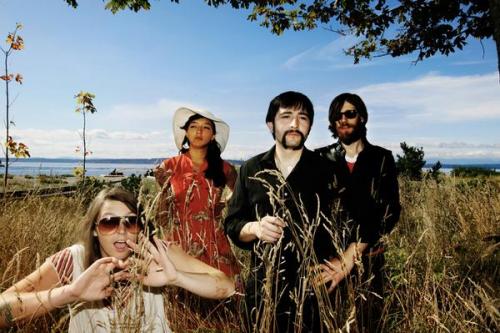 Touring for their debut album, Rotting Slowly, released on K records this May; The Curious Mystery blends a multitude of textures. Some of their songs reveal a velvet lining, but most of the time they offer up a coarse belly for you to scratch. And much like a poorly groomed pup, their sound is at once alluring and yet full of fleas. Go ahead, get bit and get the itch.

Rotting Slowly begins and your follow that mangy, stray dog down a dark alley thinking that it leads somewhere familiar, until you realize, “Preparations,” the opening track, hasn’t prepared you for all that the band has to offer.

Shana Cleveland’s voice strays into Chan Marshall strains but trails into an off kilter moan as if she forgets what she wants to say. She’s nicely complemented by the bass tones of Nicolas Gonazalez’s vocal tracks that weave in and around the floating Eastern drones of the guitars with the drums and cymbals tripping over each other’s feet.

On the instrumental, “Dragon’s Crotch” you find yourself torn between country blues drumming and the garage band distortion of the guitar during the verses. During the chorus they become a strange amalgamation of the two. My personal favorite, “It’s Tough,” swells and crashes in a subtle way, sort of like the cuts and bruises you discover after on your body after a bender. It’s melody is catchy in contrast to the sixties psychedelia tangents that are so much of this album. In fact the later half of this album is where there are real hooks to grab. Or maybe you just need to get lost and bruised following the band around blind before they reveal themselves as trustworthy.

They are playing a live set at 6PM PST on “Audioasis” on KEXP radio. Tune in. You can then catch The Curious Mystery at Jules Maes Saloon tonight.