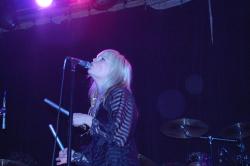 The Duke Spirit with The Kooks

It was well worth it to brave the freezing cold temperatures, hail blowing down on New York City, and 30-minute subway ride to Brooklyn to see UK rock act The Duke Spirit open for fellow Brits The Kooks.

The five members of the Duke Spirit swaggered out from stage left about half an hour after their set was supposed to begin, looking sharp in their Interpol-esque black outfits — which suited their brand of moody and distorted rock songs. Frontwoman and sometime percussion player Liela Moss all but stole the show, obviously having taken some cues from Debbie Harry and working her unbridled charisma and good looks into an amazing stage presence. And this almost made up for the fact that the sound levels were so out of whack during the band's set, I could barely understand a word she sang the entire way through.

What I did hear was 40 minutes of music that was obviously well thought-out and shaped with care. As I watched them play, I could almost imagine the band members sitting down in their rehearsal space, working through the subtleties of every bass line and fuzzed out guitar chord, right down to the keyboard parts that chimed in a few times in the set. The music was so solid that at times it almost threatened to steal the limelight from Moss, who played a furious tambourine during instrumental interludes. One of the songs toward the close of the set ended with an explosive breakdown, all five band members thrashing around as if under a spell while the guitars and bass erupted into a wall of feedback.

The Duke Spirit are definitely a band that could hold their own as headliners, and it was too bad that the audience in general (save for some frat dudes who called out drunkenly to Moss during the quiet songs) wasn't more into it, as they were waiting for the evening's second course — The Kooks.

The Kooks are probably best known for indie rock that uses the acoustic guitar as a prominent instrument, but isn’t played by The Shins. Babyfaced lead singer Luke Pritchard took the stage with his bandmates wearing tight jeans and a Subhumans t-shirt, to the excited cries of the entire room – college girls, hipsters, and frat dudes alike. They ran through almost all of the material from Inside In the Inside Out while the kids danced their way through the mosh pit that quickly formed front-and-center, and anyone who knew the words (which was everyone) sang along with Luke.

As far as frontmen who look like they could be your little brother still in high school go, Pritchard was a natural at getting the crowd to respond, often yelling at us to shout louder and leaning into the audience from atop the stage monitors (sometimes so far that I thought he might fall into the welcoming arms of a bevy of drunk girls).

A little ways into the set, Pritchard traded his electric guitar for his signature mini acoustic guitar, which looked the perfect size for his own small frame. He played the first chords of “Ooh La” and the fans shouted along to the chorus: “ooh la/she was such a good girl to me/ooh la/the world just chewed her up and spat her out.” The band’s biggest hit, “She Moves in Her Own Way,” got even the people on the sides of the room (ostensibly avoiding the chaos in the pit) to dance and swing their beer cups above their heads in appreciation.

The best part of the evening was also the most intimate, when Pritchard came back out sans the remaining 3 members to do an acoustic rendition of “Seaside” and “Jackie Big Tits” (a sweeter song than the title might suggest).