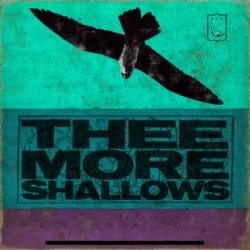 Thee More Shallows' last album, More Deep Cuts, was easily one of my top five records of 2005. On the San Francisco trio's new effort, Book of Bad Breaks, they trade in toy piano for space age distortion, resulting in a sound that is noticeably different from their previous outings. I'll admit I was disappointed when I realized this; but when I stopped expecting more of the same and allowed myself to listen purely, without any notions of what it should sound like, I began to like these songs. No, love. I began to love these songs. And when I recently saw them live (more on that to come), the deal was sealed.

The album splits its time between fully realized songs with vocals and choruses and hooks, and shorter intermittent instrumental pieces that are often distortion- and noise-heavy. Most of the time you don't notice that the track has changed, as they flow into one another effortlessly. Thee More Shallows followed similar paths on More Deep Cuts, and these shorter pieces serve well in both cases to tie songs together, creating a more fluid album.

The guts of this album are seven clever, expansive tracks that follow the band's traditional style of telling stories while melding genres and sounds. Sometimes ambient and trance-like, other times explosively rock 'n' roll, the band is innovative in much the same way as Menomena — in fact, if some brilliant promoter out there put these two bands on tour together it would be the bill of the year (note to brilliant promoters: I'm waiting…).

"Eagle Rock" appropriately establishes a soaring sound that combines keys and various noise effects, courtesy of drummers/synthers/bassists/jacks-of-all-trades Chavo Fraser and Jason Gonzales, with David "Dee" Kesler's pure, subdued vocals (with some echo tricks mixed in) and whistling. The next song, perhaps the album's most catchy and the one that everyone screamed for at their show, is "The Dutch Fist," which is multi-layered and full of aural texture, bridging the gap between the new sound and the Thee More Shallows of yore. "Night at the Knight School" follows suit, with a sort of ambient backdrop and a nice interplay of sonic explosions and recesses. After the first intermittent track (titled, appropriately, "Int 1"), "Proud Turkeys" launches with violins (or are they synths playing the role of violins?) and a screeching/halting noise effect. That song glides into "Fly Paper" via "Int 2"; "Fly Paper" is a fast-moving number that puts synths and distortion aside for the most part, relying on driving guitars and drums until the end. The string-laden "Int 3" connects "Fly Paper" to "Oh Yes, Another Mother," a strikingly emotional track that details the protagonist's family struggles with an ungrateful matriarch: "Mother you were first upon the beach, you stormed the wake boards and the free bar at Normandy / where they shot at grandpa's head." The following track, "The White Mask," continues the emotional tone, setting up a death scene with vivid imagery about meeting one's maker, over a reserved and sullen guitar and light distortion.

The album's next-to-last track, "Chrome Caps," is a four-minute instrumental that seems to drag the album a bit more than it should — it's one of those pieces that serves the musicians more than the listeners, rich in noise-jam pleasure but a little too long if you're not one of the jammers. (Note to friends of the TMS bandmembers: I have a good gift idea for their next birthdays.) The song's placement, segwaying into final track "Mo Deeper," ends the album on a slow experiment-y note, instead of leaving off with something more full and satisfying. But if you put the CD on repeat, you'll find that "Mo Deeper" leads delightfully back into album opener "D. Shallow," reprising the lyrics from that song in a slower, more introspective manner. These two tracks bookend the album gracefully. The band's strength is in creating an atmosphere of sound, drawing you in from the first note and not letting up. They make music that suits introspective moods, and it's best listened to when you can focus your full attention on it and pick up on the small nuances and grace of their musicianship. Book of Bad Breaks is indeed an album I have come to love, but I still think I love More Deep Cuts just a smidge more. Solution? Check out both (and/or either of their other two releases, which I've only heard pieces of), and try to get out to see them live — they're touring the U.S. now.