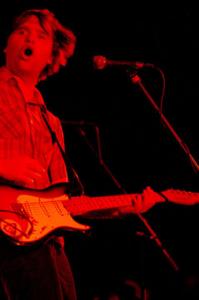 This seems oddly appropriate with the current guilty pleasures blog discussion because is bootleg of Ben Gibbard performing live in Milwaukee is the perfect example of someone acting out on their guilty pleasure.

Like a latter-day Billy Bragg, Gibbard spends a lot of the track actually just talking about the song in question rather than playing the darn thing and for good reason. Ben sets out why he thinks a certain "Complicated" by our favorite little wanna-be-punk-pixie Avril Levigne is a really good song. He somehow goes on about channeling spirits and his band mocking him and finally comes to the profound conclusion that it's awesome because … it's awesome.

What follows is the ever-so-charming Gibbard playing "Complicated," not making it through the first verse without laughing because of his self-conscious reaction to the crowd be amused/horrified by this and finally getting himself together to finish the song. However, the best part comes after the song when Gibbard assesses Avril's song for its lyrical content and moral theme, reaching the conclusion that more or less that the fella in question really just doesn't like her that much. Take that Ms. Levigne!

Gibbard has remarkable latitude from his fans for these odd sojourns into cover land. Off the top of my head, Ben and(or) Death Cab for Cutie have covered the following: Bjork, the Cure, Michael Jackson, the Penguins (or Marvin Berry and the Starliners), Avril and I'm sure many others, and we mostly feel pretty OK about it. That's just how charming Ben can be and we can eat out of his hand like well-trained ducks. Should we (OK, what I really mean, rather than implicating the world, is "should I") feel bad about this sort of behavior. I suppose not, considering that what being an fan is, right? Right?! Damn.