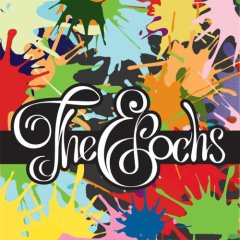 The Epochs (pronounced 'ee-poks') make my heart swell. The band's self-titled debut album traverses pop, soul, electro and moments of everything else. The Epochs don't appear intimidated by music and that's refreshing. Even better that it actually works. The Epochs takes the listener on a delightful journey.

Within this 11 track gem are nuances of TV on the Radio as well as non-disco Bee Gees. There's something smart in the music; integrated into each song are layers, and movements and lyrics that for the most part say just enough to convey so much but not seem preachy or patronizing. Listen to "Love Complete" which is happy, bouncy, floating and a little sexy. I find myself shimmying and grooving each time I hear the song; I can't not move. Unlike the other songs on the album, "Mouths to Feed" is a moral tale that examines the poor, hungry and downtrodden. The opening beat of the song, like the ticking of a clock, leads into touching and melodic vocals: "There's no escaping … there are always mouths to feed, never any holes to breathe … and you can gnash your teeth."

The Epochs is a strong, consistent and diverse album that can simultaneously be light and danceable as well as thoughtful, smart and textured. Let's hope The Epochs keep bringing it!