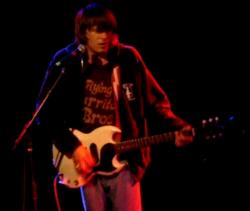 The Epochs and the Lemonheads at the Paradise

the sleepwalker April 6, 2008 no Comments

The opening band for the night was Brooklyn's The Epochs (rhymes with sea fox). I am still not quite sure how to describe them in simplest terms without erroneously bringing Coldplay to mind. They presented a pleasant, wavy atmospheric rock with lovely double vocals by like-sounding brothers Ryan and Hays Holladay. The songs also included wide-sounding guitar, a dichotomy of soft and angular synths (both live and programmed), dancy drums and percussion (also both live and programmed), and bouncy bass.

The rhythm section held the songs together in a tight groove built upon pre-recorded backing tracks. Whenever a band has canned beats and tracks, it's a great challenge to overcome the presence of a dulling stiffness. The performances are inherently stuck with an unnatural prohibition from temporal drifts, and the intensity is often compromised for the regularity. The Epochs suffered a little from this, but drummer Kotchy was able to express strong dynamic in many places, skillfully accenting the highly compressed synthetic drums. Bassist Kevin Smith was perhaps the most unconventional performer in the group. While his feet remained firmly planted in place and his eyes held as if in a trance, Kevin's full hand plucking and striking style was interesting to watch. In many ways, it replicated my expectations for a bass-playing robotic arm, spastic, yet precise. 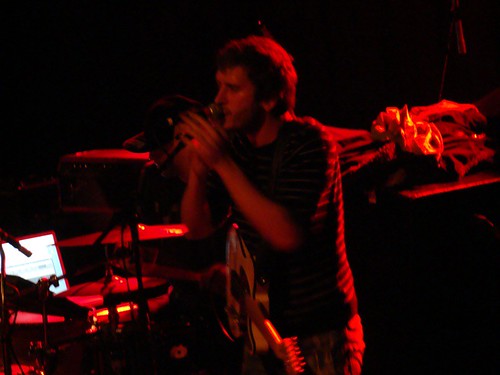 There was something really catchy and soulful about the vocals, which served more as a layered instrument than a focused presentation of lyrics. I heard tinges of The Beatles, The Bee-Gees, and Radiohead. The brothers Holladay used their like voices as a strength to both harmonize and double when appropriate. Each alone was enjoyable, but there was significant synergy when the two sang together.

Overall, the songs were catchy and hooky, but somewhat nondescript. That is, one would be unlikely to leave the show singing the chorus to "Hyena," but at the same time, craving more of The Epochs would be a very likely outcome, especially after seeing only the brief six-song set.

The Epochs setlist:
1. Hyena
2. Head in the Fire
3. Opposite Sides
4. Caught Up In The Laughter
5. Mouths to Feed
6. Giving Tree

The distinction between Evan Dando and The Lemonheads has always been a vague one. By the time the seminal It's A Shame About Ray was released in 1992, Dando had already shed his original collaborators and replaced them with a rotating cast of what have always been, essentially, subs. With the announcement of a tour focusing on again presenting Ray in its entirety, one might be inclined to wonder about the inclusion of the era's musical co-conspirators. However, if we are to trust liner-note credits, Dando has often co-written his songs, but the process has seldomly included his bandmates. So, although the current touring lineup's inclusion of relative newcomers, bassist Vess Ruhtenberg and drummer Devon Ashley, may seem to dilute the show's primary billing purpose, Dando and his trademark fop were more than sufficient to bring us back to the early '90s. Admittedly, I had also hoped that we might be paid a visit from Ray backup-singer and bassist Julianna Hatfield, but alas, no such luck.

The band was a little bit sloppy and loose, but did a good job recreating the bouncy, almost punky vibe of the record. Although it was hard to tell if his heart was really totally into it, Dando's voice was crisp and full and the songs were fun and sounded really good. The trio breezed through the 29-minute album with few substantial pauses. 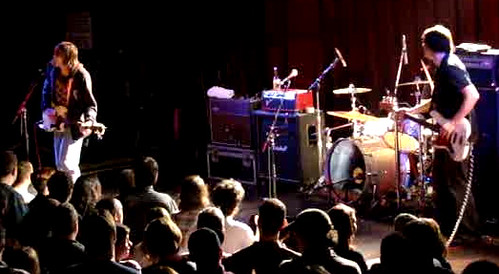 The original pressing of the record closed out with the cute, tongue-in-cheek rendition of "Frank Mills," a song from the musical Hair. The album's later repressing tacked on the band's popular rendition of Simon and Garfunkel's "Mrs. Robinson," a song that Dando has openly shunned ever since. As the live, solo rendition of "Frank Mills" came to a close, the capacity crowd was left only a brief moment to wonder about the inclusion of the bonus track in the complete live performance of Ray. Dando quickly, and perhaps deliberately, broke into his next song, a cover of the Misfits' "Skulls" complete with lyrics that contrasted the anticipated friendly, coy playfulness of "Mrs. Robinson."

The remainder of the evening was essentially a mix of the band plowing through heavier tunes from The Lemonheads catalog and Dando's solo renditions of quieter originals and covers. Notably missing from the set were any songs from Dando's 2004 Baby I'm Bored or the band's 2006 self-titled release, despite the presence of a fair percentage of high-quality songs on each.

The night was not without strange moments. Although Hatfield's absence was noted, we were "graced" with a brief appearance from the spastic and eccentric Nash Kato, lead singer of '90s one-and-a-half-hit wonder Urge Overkill. (Rumor has it that he's in town making a new UO record.) Kato joined Dando onstage to perform an unrehearsed and embarrassingly bad rendition of "Girl, You'll Be A Woman Soon," the UO cover of which was famously included on the Pulp Fiction Soundtrack. Kato's failure to present a recognizable version of the signature walkdown riff and Dando's limited knowledge of the lyrics made those minutes cringeworthy.

Apart from the brief comedic interlude of straight-man Dando and his foil Kato, the evening went smoothly and the surprisingly taciturn Dando managed to successfully bring me right back to the days when I wore out my Lemonheads cassettes and my Ray t-shirt grew threadbare. My only great concern is that Dando, who struggled for years to successfully overcome his indulgent lifestyle, lacks confidence about his recent and future output. Maybe we'll be blessed with It's Still A Shame About Ray sometime soon.

Encore 2
1. If I Could Talk I'd Tell You (Car Button Cloth)
2. The Great Big No (Come on Feel The Lemonheads)

Video of much of the show, including all of Ray was posted at YouTube. Here are a few select clips:

It's a Shame About Ray / Rudderless