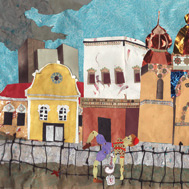 The Hungarian Suicide Songbook is one of those albums you simply can’t help but sing along with — a feat I found myself participating in mere moments into my very first listen. The enchanting lyrical repetitions backed with imaginative synthesizer creations make for an impressive collection of music.

The Hungarian Suicide Songbook is the second full-length record from Seattle-based Man Plus, and, while not familiar with the band’s earlier work, I found it to be a well-produced album full of impressive musical styles and a lyrical composition that reveals more after every listen.

Because of the creative use of synthesized beats and effects, the songs often have a futuristic space voyage sound (the band shares its name with a sci-fi novel from the 1970s). Accompanying this musical experimentation are loads of rhythm guitar and plenty of repetitive choruses that instantly raise the album to an elite level of pop catchiness. “A Ghost Is A Ghost Is A Ghost Is A Ghost,” a track that sounds like it was co-written by Gertrude Stein, has such sweet repetition it is almost impossible not to have the chorus ingrained in your memory after the first listen. The same goes with most of the songs on the album, including “My Kind of People,” whose chorus of "If you’re down all the time, you’re my kind of people," gives perfect insight to what the bulk of the songwriting on the record is all about.

Even though the album has many moments that come close to an around-the-campfire level of sing-along-ability, it is by no means a blissful joyride of fluff. These songs carry a dark and cynical tone — starting right away with the repeated mantra, "Every day it gets a little worse" halfway through the opening track and continuing with such lines as "I don’t need humility, I need some success. I’m crushed with all your hope, I’m crushed with happiness" on "Prayer Works," and the tantalizing repetition of "You don’t have to get high alone, you don’t have to end up like me" on "Once in Awhile (Getting High Alone)." At times I noticed myself happily lolling along with the music, only to realize I was harmonizing to songs about killing babies (“What I Like About Love”), startling tales of sex and death (“Down At My Place”), and an overload of internal angst (every track on the album). Jared Mill’s half-raspy vocals are the perfect outlet for these lyrics — fittingly carrying us through equal periods of distress and harmony. After a few careful listens I developed a strong appreciation for the lyrics and themes of the album, even though I’m still not sure what most are about. Man Plus doesn’t want to sing about little pop romances or idyllic times — they have a lot more on their mind.

While the lyrical content is full of engaging pessimism, the music is so fun and energetic it’s easy to forget you’re listening to an album that bills itself with Suicide Songbook. Man Plus’ ability to meld depression-fueled lyrics with a powerfully poppy sound creates, dare I say it, one hell of an enjoyable experience. Maybe even, perhaps, an uplifting one.