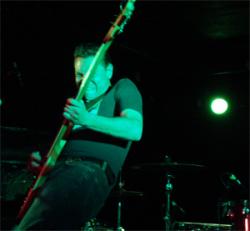 The Konks and Kelley Stoltz

Boston locals The Konks started their set with the song "Cannibals" and I knew this was going to be a good night. The Konks occupy some lovable garage-rock space between The Cramps and The Kingsmen. If you’ve ever listened to The Nuggets box set and wished there was a band doing that today, this is it. The singer, Kurt Konk (who, incidentally, my husband remembers seeing on MTV’s Headbanger’s Ball in the early ‘90s when Kurt was in grunge-rock outfit Bullet LaVolta) plays just two "lousy" drums — a snare and a floor tom — propped up on milk crates. The guitar player is missing a finger. All of this is documented in their anthemic theme song “29 Fingers” (“29 fingers, only six are thumbs; we're The Konks, and we don't care!”). This instrumentation gives The Konks a primal feel, and no drums or fingers are missed. Their set breezed by with Kurt shouting, whooing, and never missing a beat, the pompadoured bass player making bass-player faces and bopping around, and the guitarist concentrating on making the noise. They played one cover, Brian Eno’s “Needle in the Camel’s Eye,” a quick nod at some glam rock influences. They ended their set with my favorite song from their self-titled studio album (out on Bomp! Records), “God Says,” with the best one-line-that-comprises-the-entire-song ever: “God says, ‘whoa motherfucker!’”

The Konks Setlist:
Cannibals
Can't Get Along with You
Wasn’t That Fun
Nerves
Blood Red
Sidewinder
Lost Cause
Don’t Know
29 Fingers
Needle in the Camel’s Eye
God Says

Sub Pop artist and San Franciscan Kelley Stoltz took the stage as the room was starting to fill up with people. It’s a bit hard to pinpoint Kelley's sound, part jangly ‘60s pop (I definitely hear some Beatles and Beach Boys), part ‘70s garage, and touching on singer-songwriter, but due to the lush arrangements, never quite getting stuck there. The first song had Stoltz on keys and I swear I heard some Jefferson Airplanesque lead lines. For the second song, an especially rousing number called “Tintinnabulation” (go listen on his myspace page), Stoltz switched to guitar and stayed there for the rest of the night.

His band is a six piece: lead guitar, bass, drums, keys (who, as my one criticism of the band, didn't play much that was noticeable and looked bored the entire time) a multi-instrumentalist who played the xylophone (little leads on most songs), saxophone, and most awesomely the theremin! These last two players let on that they were in another San Francisco band, The Ramshackle Romeos, by wearing their own t-shirts. The star player of the group was the drummer. He gave the songs the garage rock feel by playing most of the ride parts on the floor tom, and adding interesting accents all over the place. He also played expressively with fluid movements.

Stoltz gave the calm, delicate banter of the host of a private party. Before the song “Birdies Singing,” Stoltz announced that “this song is a nice one for doing some aerobic exercise to” and some audience members took him up on it and started hopping up and down. Kelley Stoltz sweetly serenaded us with songs about girls with “champagne eyes,” laments on why “you’re free and I’m freezing,” and calls for a lover to come back, because “if you ever thought of coming back, now is the time.”

After telling us that we made a wise decision to come out for a rock show tonight (what with all of the other possible choices including “home movies”), one of the drummers for The Dirtbombs came out for the last song and we were treated to doubled drumming, which was particularly cool. My understanding is that this is an arrangement The Dirtbombs use, and I would have liked to see them, but my companion and I had another engagement for the evening.

Setlist:
Wave Goodbye
Tintinnabulation
Mother Nature
Birmingham Eccentric
Everything Begins
Ever Thought of Coming Back
Your Reverie
Put My Troubles to Sleep
Birdies Singing
Are You Electric
Gardenia
Mt. Fuji

Here is the music video for “Your Reverie:”