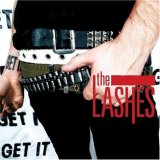 It's been nearly 18 months since Columbia Records came knocking for Seattle's favorite pop-hipsters The Lashes. During that time, the Spokane-originated group has rocked the stage at radio festivals, conquered the clubs, and recorded its first full-length record. The release of Get It was delayed several times by the Folks In Suits who make the important decisions about when the masses get to hear new music, leaving the local Lashes fans hungry for over a year.

But that's just the back-story, the basic bio any press kit can provide. To fully appreciate Get It, one has to literally get who the Lashes are, where they're from, and how elated they must be to get where they are right now, expectantly perched on their brink of their major-label debut.

The Lashes burst onto the Seattle scene a few years back, led by frontman Ben Lashes (nee Clark), Seattle's imaginarily-professed answer to Jarvis Cocker. The Lashes loitered in hipster haunts for years, building a fan base for their live shows as much as their antics (remember when they stormed the Sub Pop anniversary party with "Sign The Lashes!" signs?).

Initial radio hits came in the form of two cheeky pop hits off their The Stupid Stupid EP (on Lookout Records), both of which name-checked the local indie-rock music columns of the moment ("Death By Mixtape" and "It's My Party" referencing now-defunct music columns in Seattle Weekly and The Stranger, respectively). It was exactly this sort of audaciousness that has brought The Lashes to where they are now: they are no self-effacing Seattle hipster band. The Lashes want to be famous pop-stars; they want to be gossiped about in NME and hung in Tiger Beat centerfold posters on young girls' walls. They've been completely direct about this goal since the start, and if you don't get their honest ambition, you're not likely to fully appreciate Get It.

The folks at Pop Matters didn't get it *, giving Get It a 4/10 and accusing The Lashes of playing it safe, of creating Hot Hot Heat's next record instead of their own. But what the folks at Pop Matters don't realize is that The Lashes likely wanted nothing more in the world than to be accused of recording the next Hot Hot Heat record. Ben himself proclaimed Hot Hot Heat as his "favorite record of the year" back in the day. We saw Ben at the Ashlee Simpson show last year (sorry Ben, but outing you also outs igLiz, if that's any consolation). The Lashes are a true pop band who aspired to create a pop record. And they succeeded.

The record starts with "New Best Friend" and finds Ben Lashes rhetorically asking, "Do you wanna be my new best friend tonight?" Catchy, and a promising start. The record peaks with the next two tracks: "Daddy's Little Girl" and "Sometimes the Sun" are outright challenges to rock radio to reintroduce the POP back into pop rock.

From there, the record follows with eight more tracks that don't quite live up to the formidable one-two punch of a wakeup call of those first three tracks. Admittedly, almost every song on Get It involves Ben Lashes singing about his girl troubles, which can become monotonous and makes repeated listens of the album all the way through tough. But The Lashes aren't here to conquer philosophical dilemmas or solve world hunger. If their worst offense is that discerning listeners will likely skip around the CD player to listen to their favorite three or four tracks (I recommend "Safe To Say"), rather than listen to Get It as a body of work, so be it. Doesn't that just mean better mix-tape fodder? Isn't that exactly where The Lashes would like to be, perfectly nestled between Hot Hot Heat and Pulp on your favorite iPod mix?

Overall, Get It is a noteworthy record by a young local band with the backing of a major label and a fan base ravenous for new music. Ranking this record was challenging, and almost irrelevant, superfluous. Get It is surely not likely to re-route the course of contemporary music. But it likely is the exact record that the Lashes wanted to release, and that their fans want to hear — in and of itself an accomplishment, especially on a major label debut.

*
{ed note: It should be noted that while I think the reviewers might have missed the point of Get It, I completely concur with his assessment of the Lashes nicking off the Magnetic Fields for a song title ("A Pretty Girl Is Like a Melody") without even approximating Stephin's wit or metaphors. And the 'Please please please let me get what I want," bit (from "Please Please Please") was a bit disconcerting in a too-close-to-the-original way as well. Was it homage? ~igDana}