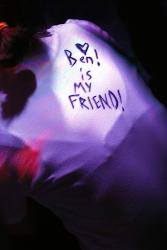 The Lashes with Kay Kay and His Weathered Underground

Last Saturday VERA was host to a rather eclectic line up of local bands, which included relatively new band Ships, the Lonely H from Port Angeles, and two Seattle favorites Kay Kay and His Weathered Underground and the Lashes.  I think that this line up really proved something that I believe is true: everyone in Seattle has about 2 degrees of separation.  The night was full of amazing music and pleasant surprises everywhere, which made it, as Ben Lashes said, "The party we've been waiting for all week."

Kay Kay and His Weathered Underground play so effortlessly together that you would never guess over half of the band are transient members.  The band is made up of three core musicians: lead singer and guitarist Kirk Hoffman, keyboardist Kyle O'Quin and electric cellist Phil Peterson, also of Tennis Pro.

Last Saturday at VERA Kay Kay recruited the Lashes' bassist Nate Mooter, Ships' drummer Garrett Lunceford and a host of other musicians who played everything from electric violin to maracas to the flugelhorn. I imagine that it's hard to make all these unusual instruments work together and appeal to an audience of young indie rock enthusiasts, but Kay Kay manages to incorporate every strange sound into a myriad of jazzy, funky pop songs. The band performed so naturally that if felt to me as if I was watching them compose each song as they played it.  The various sounds complimented each other beautifully, but they never sounded rehearsed or forced; each song was like the best improvisation imaginable. Every band member seemed passionate about the music and their constant dancing and moving to the beat added to the lighthearted air of extemporaneous jamming. Unfortunately, for whatever reason, Kay Kay's set was fairly short, but they left with us with the tantalizing information that they will be playing another all ages show soon, at the Triple Door on February 18.

I saw (and heard) Seattle powerpop band the Lashes for the first time at Bumbershoot last year, and for me, they really raised the bar for live shows. I came to VERA on Saturday with the thought that there was no way they could match their incredible performance last summer, but I left knowing never to doubt the Lashes. As soon as they took the stage the crowd got considerably rowdier than it had been for Kay Kay, and I found myself in the first moshpit I'd seen at VERA.

The Lashes know how to get people energized, which unfortunately resulted in one kid leaving the dance floor with a bloody nose. But the rest of the night went injury-free and the ever charismatic lead singer Ben Clark (nee Lashes) worked the crowd into a dancing, cheering frenzy while he and the rest of the band played a set full of catchy and powerful melodies. And, of course, at the end of the night, confetti was poured, silly string was sprayed and hundreds of noisemakers were thrown into the audience by Ben so that we could all hum along with the last song. I had previously assumed that the party favors were unique to the Bumbershoot show, but now I have to guess that this is trademark Lashes. They have the unique ability to involve their audience and make each show special and memorable.

I know there has been a fairly heated debate on TIG concerning the Lashes and that some have called them "gimmicky", but I disagree. The Lashes have in fact taken live shows to the next level by allowing their audiences to do more than just listen and watch. I whole-heartedly believe that they do what they do because they love the music and they love their fans and want everyone, themselves included, to have a good time.

After the last song was played, Ben announced something that I honestly couldn't hear over all the noisemakers, but eventually I understood from the shouts of people around me that there was pizza in the lobby. The crowd poured out of the dance floor and into VERA's cozy entrance hall where there were dozens of Pagliacci’s pizza boxes open and wafting delicious smells throughout the venue. The Lashes truly offer everything anyone (specifically a mob of teenagers) could want: great music, a fun time, and occasionally good food.