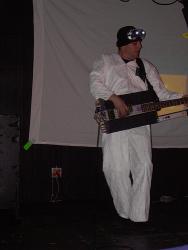 After the countless hours I spent watching videos on MTV all day long in my single-digit years during the 1980s, I remember exactly 5 videos from that decade: “Money for Nothing” by Dire Straits, “Walk Like an Egyptian” by the Bangles, “Sledgehammer” by Peter Gabriel, “I Hate Myself For Loving You” by Joan Jett and the Blackhearts, and “What’s On Your Mind (Pure Energy)” by Information Society.

Regarding the latter, with the loud colors, fake and exaggerated instruments, and carefree dancing against a white background while words like “think” and “destruction” were flashed across the screen; in 1988, my 9-year old self was mesmerized.

Yet for the many, many times I heard that song during my childhood, please believe me when I say that I have no recollection of hearing it once or even thinking about Information Society between 1991 and December 20, 2007, when I was at El Corazon for Imaginary Liz’s birthday party and saw a poster announcing this show. I was, of course, curious to listen to a band I remember when I was much, much younger but escaped my consciousness since then (truth be told, by using synthesizers and samples pre-teen ChrisB , who never even heard of “new wave” at that point, thought they were making music above his head and “didn’t get it”).

When I got to El Corazon last Sunday night, I really had no idea what to expect, both in terms of the band and the crowd. By the end of the night, there was some nostalgia, but I found myself realizing the band’s music stands up as much today as it did during my childhood.

Also on the bill with InSoc, as they are often called, were Fascination Street and The Sky’s Gone Out, local cover bands for The Cure and Bauhaus, respectively. Although I appreciate both bands’ legacies (especially The Cure), I was hoping for some also-rans from what Tom Wolfe called the “Me Decade”. You can’t convince me that Escape Club really had better plans that weekend.

Still, though, El Corazon was pretty close to full on that Sunday night to see Information Society. The crowd was enthusiastic – and several people were dancing throughout the entire 80 minute set. It was great to see, even if it made it difficult to take notes. With Larson’s monotone voice and the band’s use of heavy basslines and electronics, it reminded me of a more synthetic She Wants Revenge (who remind me a lot of Joy Division and Depeche Mode). Or maybe a more dance-y Kraftwerk is what they’re going for.

There were several factors that made this show enjoyable, but the mostly, I think, because the band did not seem to be milking the nostalgia for what it was worth. They played several songs from Synthesizer, their 2007 album (Larson joked it was available for illegal download off of your friends’ servers), a couple of rarities that were never released, and refused the (repeated) requests of one audience member for his favorite song. InSoc moved between their back catalogue and newer material, almost alternatively.

InSoc is touring with three members; all of which, I believe, were part of the lineup when the band was at the peak of its success: singer Kurt Larson, bassist James Cassidy (whose instrument looked like it was purchased from Radio Shack in 1986) and producer/founder Paul Robb. Larson was rocking pigtails and InSoc attire. First he asked what kind of person wears a leather jacket of his own band, then after he took it off, he was also wearing a black, long-sleeve InSoc t-shirt. Cassidy and Robb were also dressed in black and wore sunglasses through much of the set.

Aside from the opener, “Peace &  Love, Inc” (the title track from its 1992 release), I found myself enjoying the newer and unreleased songs better than the hits like “Think”, “Walking Away”, “Running”, and “What’s On Your Mind (Pure Energy)”. The latter seemed anti-climatic and gimmicky. It was the first song of the encore and the band returned to the stage in white hazmat jumpsuits with their logo on it and wore goggles – Robb’s and Cassidy’s had lights on them. One smartass behind me shouted “I LOOOOOVE Devo!” which was actually pretty funny.

One definite highlight for me was “Wrongful Death” a new-wavy dance number that had some pretty dark lyrics and sampled a person screaming. Larson said that it could only be heard by people at the show that night. A recorded, but primitive, version is available for streaming on its website. Larson quipped that it was new wave, didn’t have a song structure and was full of teenage angst, so it could only have been written when they were all 19.

When it was all said and done, I thoroughly enjoyed the set. There were some campy moments (the hazmat attire to name one) but all in all, Information Society’s longevity is pushing a rough 25 years now and they still continue to make interesting music and put on entertaining sets in clubs, not casinos.

I don’t know if Information Society is still “relevant” (they biggest hits were two decades ago and have been underneath a lot of radars since then) – it’s a judgment that I can’t make, but they should be.